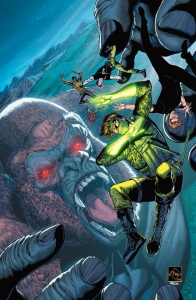 Well, after a very long wait, Richard C. Meyer’s Jawbreakers – Lost Souls has finally arrived. It took awhile to come out but Meyer has kept people clued in every step of the way due to all the roadblocks and challenges that popped up during this comic’s creation to it finally getting in the consumers’ hands.

I’m glad that I finally got it, as I’ve wanted to review it for a long time.

Full disclosure, I’m not a Comicsgater but I get lumped into that label by people who don’t like those of us who question things or criticize the comic book industry. Also, when I reviewed Meyer’s Iron Sights, I upset a lot of those who lean in a direction opposite of Meyer and most of his supporters. But I liked Iron Sights, despite its issues, and gave that one a 6.75 out of 10.

That being said, Jawbreakers is a step up from Iron Sights but I still have some issues with it, overall.

For the most part, the art in the Lost Souls story is pretty good. Jon Malin is talented but I’m not always a fan of his characters. Everything looks very sleek and his characters seem a bit slender and elongated in certain poses. Still, he’s much better than the average bear and he’s only getting better with more high profile projects under his belt. I’m pretty excited about his Graveyard Shift comic, which are now hitting mailboxes.

Brett R. Smith’s colors are absolutely fantastic though. I also love the cover by Ethan Van Sciver and Kyle Ritter.

This release also features two “remastered” versions of older Jawbreakers stories. One is drawn by Simon Bennett while the other is done by Kelsey Shannon, who also did the Iron Sights cover. These two additions to this release don’t look as good as Malin’s work. Bennett’s parts need more refinement. Shannon’s are better but I’m not a huge fan of the style he uses here and it’s not as polished as his Iron Sights cover, which was actually stunning.

I thought the story was decent, as it is similar to a G.I. Joe story with a kaiju thrown in. I love both of those things, so mixing them is a cool idea. However, this isn’t G.I. Joe. I’d say it’s better than what IDW Publishing has done with the actual G.I. Joe franchise in the years since Chuck Dixon stopped writing it but this feels a bit thin.

If I’m being honest, I need to know something about the characters’ backstories. Here they are thrown into a situation and you just go along for the ride. Meyer needs to develop these characters a bit more but since he has plans to use these characters in the future, maybe we’ll get to know them better. Right now, they feel like generic placeholders or those G.I. Joes that would pop up into a story because they had an action figure but they weren’t popular enough to get more than a minor cameo.

This might sound harsh and I don’t mean it to be but G.I. Joe had a lot of toy companies that knocked them off with toylines like The Corps! and X-Troop. Right now, this feels more like The Corps! than G.I. Joe. It is kind of generic but again, that’s probably because these characters need more depth. I need to care about them and I don’t just off of this story.

I do like that this just gets to the action and it’s pretty much balls to the wall from start to finish. But over time, we’ll need more than that. I can excuse the lack of depth being that this is, right now, a one-off action story.

Jawbreakers is a good start to something but it will take some time to turn it into a brand. The problem with that though, is that crowdfunded comics take a long time to create and distribute. This is one of my criticisms of doing comics this way when I’ve lived in a world where my favorite heroes and teams hit my pull box on a monthly basis. It is much easier finding yourself invested in characters and stories that come out with some regularity. I don’t know if crowdfunded comic franchises in the making can succeed in that way. Plus, people lose interest in things when there’s a long wait.

But for now, I did enjoy this. I certainly don’t have any sort of buyer’s remorse. This was a cool experiment and the end product mostly delivers.