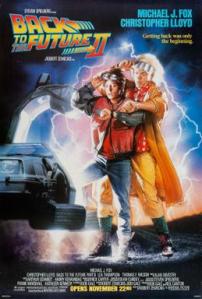 “The almanac. Son of a bitch stole my idea! He must have been listening when I… it’s my fault! The whole thing is my fault. If I hadn’t bought that damn book, none of this would have ever happened.” – Marty McFly

Back to the Future is pretty much a perfect film. Back to the Future, Part II isn’t perfect but it’s so damn good, it’s hard to see the flaws unless you really look for them and then, they’re mostly narrative issues that can be dismissed if you look at this with a Doctor Who “timey wimey” sentiment.

This chapter in the classic and awesome film series sees our heroes go to the future, return to an alternate present and then take a trip back to the past where we saw them in the first film. Part II takes you to more places than the other two films combined but it works really well for the middle act of this three act trilogy. It also does the best job of showing the consequences that can arise from disrupting the timeline.

I think that this has the most layered plot and with that, tells a more complicated story. I remember some people back in 1989 saying it was kind of hard to follow but these were also people significantly older than me. As a ten year-old, I thought it all made sense and I still do. Granted, there are some other paradoxes that this would have created and the film just conveniently ignores them but if it were to follow science to a T it would have broke the movie.

The cast is still solid in this film but Crispin Glover is sorely missed. I really wish he had returned to this just because I think it would have made the story better. While he appears in archive footage and another actor stands in for him and wears a mask of his face, this all lead to a major lawsuit that forced Hollywood to change how they use the likeness of non-contracted actors.

While I can’t say that this is better than the first movie, it is my favorite to revisit just for all the things it throws at you. It’s certainly the most entertaining overall and it sort of embraces the absurdity of its subject matter without overdoing it. It’s mostly a comedy but it is balanced well with its more dramatic moments. There is an underlying darkness in this chapter that the other two movies don’t have and I think it gives it a bit of an edginess lacking in the other two. Not that they needed to be edgy but that element works well here.

Back to the Future, Part II is how you do a sequel. It upped the ante, was more creative than its predecessor and enriched its universe, giving it more depth while developing its characters further.

Rating: 9.75/10
Pairs well with: the other two Back to the Future movies, as well as ’80s Steven Spielberg and Joe Dante Films.