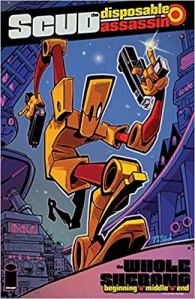 If you like comic books with lots of crazy action and offbeat humor, than this may be the title you’ve been yearning for.

I had a friend in high school that used to read Scud all the time. I wasn’t big into it but I would still often times read through the comics he brought to school. Over time, I grew an appreciation for the character and the style and it was one of the first indie comics to really show me what else was out there beyond the Big Two.

Over the years, I had picked up a few single issues but I really wanted to give the whole series a read since it was only 24 issues long and not some monster epic like Dave Sim’s Cerebus, which also steered me towards more indie work.

Luckily, the whole run of Scud, the Disposable Assassin is collected in a thick paperback called The Whole Shebang. It’s certainly worth owning for any serious comic book reader or collector.

This release is a big fat brick of nearly 800 pages but reading through it was a breeze. Scud is just entertaining as hell and I love the art, even if other artists came in from time to time.

There aren’t many comics that actually make me laugh out loud but Scud is one of them. While I understand that this might not be everyone’s cup of tea, those people probably don’t like tea and can’t be trusted anyway.