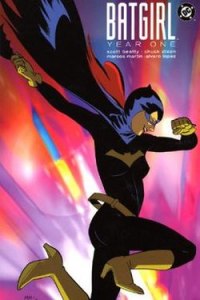 Batgirl: Year One has been paired up in a trade paperback format with Robin: Year One in some releases and for good reason.

Mainly, this is done by the same creative team and it has a similar tone, art style and narrative structure.

This was released a year before Robin: Year One and is equally as good, if not a wee bit better. Reason being, this has a threat that feels larger, a plot that’s more cohesive over the multiple issues, as well as more characters that come into the story in ways that really help to flesh out Barbara Gordon’s origin.

Scott Beatty and Chuck Dixon wrote a body of work that is close to being a masterpiece and is one of the best Batgirl stories ever produced, hands down.

Just like with Robin: Year One, which I already reviewed, I absolutely love the art of Javier Pulido and Robert Campanella. It has a pristine look while also looking retro for the time where this is set. It has a similar feel to Jeph Loeb and Tim Sale’s Batman epics, also from the same time period, and it even kind of channels elements from Batman: The Animated Series, which was still very fresh in people’s minds in 2000.

If you know Barbara Gordon, this book just feels right. Contrary to a lot of her more modern stories, this is the Batgirl I want to read about. I have loved this character since first experiencing her on the ’60s Batman TV show. While that was campy as hell, Barbara always resonated with me and I always loved when she showed up alongside the Dynamic Duo.

Batgirl: Year One is a classic in my opinion. It isn’t something that I hear a lot of people reflect on but it was a real high point in the careers of all the creators involved and for the character.

Rating: 9.25/10
Pairs well with: Robin: Year One, as well as the Batman related books by Jeph Loeb and Tim Sale.