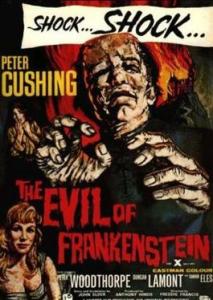 “I realized long ago that the only way to prove my theories was to make something in my laboratory that actually lived. I never told you, Hans… I succeeded once.” – Baron Frankenstein

This is the third film in Hammer’s long running Frankenstein film series but it completely overlooks the solid second film and only builds off of what happened in the first one. So I guess it’s like an alternate “part two”.

While that’s pretty common in horror franchises these days, it’s a little strange that they ignored the second film, which I thought was pretty good and had a really satisfying ending that set up a formula for future sequels.

In this chapter, Peter Cushing’s Baron Frankenstein searches for his creation from the first picture. He ends up finding the monster frozen in ice. The monster is then defrosted and brought back to life.

The film goes back and shows the creation of the monster but these flashbacks are new scenes and different from how they appeared in the original picture. So really, this kind of omits the context of the first film in a similar way to how Evil Dead 2 retells the events of The Evil Dead in its own condensed way.

Despite all that confusion, as I’m a stickler for continuity, I still like this chapter in the franchise. But if Peter Cushing is playing Baron Frankenstein, I’m probably going to like the film. Luckily, none of them are really bad.

This one was distributed in the United States by Universal Pictures, which gave the Hammer team the ability to make the monster look more like Universal’s classic design from the Boris Karloff movies. Weirdly, they made the creature’s head way too boxy in their attempt at creating the look of the Karloff creature. For most people it probably looks bad but it is at least a memorable version of the monster unlike the versions we got in parts two, four and five.

While this one isn’t directed by Hammer’s maestro behind the camera, Terence Fisher, it still has the same sort of spirit and tone. Freddie Francis did an acceptable job in place of the great Fisher.

The Evil of Frankenstein is a pretty strong outing by Hammer, even though it’s not one of the best in their long filmography. I still enjoy it for what it is and it kept the series interesting and fresh. And as always, Cushing was dynamite.

Rating: 7/10
Pairs well with: other Hammer Frankenstein films, as well as the Hammer Dracula and Mummy series.