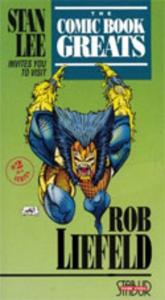 Since I really liked revisiting the first episode in this series, which featured Todd McFarlane, I definitely felt the urge to revisit this one with Rob Liefeld. Besides, I’m trying to work my way through all of these, as there were many I hadn’t seen back in the early ’90s and the ones I own, haven’t been played in years because PlayStations doesn’t play VHS tapes.

This one is like the previous one in that it is hosted by Stan Lee and he interviews a single comic book pro: Rob Liefeld.

Liefeld talks about what inspired him to get into comics and the really unorthodox story at how he got his foot in the door, which seemed really easy compared to the stories of other pros.

This also gives a good rundown of his art style, his creations and also his earliest work on DC Comics’ Hawk & Dove, as well as Marvel’s The New Mutants and X-Force titles.

While Rob would go on to help found Image Comics a year later, along with McFarlane and others, there isn’t any mention or allusion to that here. Well, other than Rob drawing Diehard, who would become a character in Youngblood. I think that more Image stuff does come up in later videos, however, as Stan Lee has a few of the other Image creators in later episodes and Liefeld and McFarlane also return in one of the 1992 video releases.

I love revisiting these, thus far. I hope the other installments continue to be as engaging. Especially, since some of the later episodes feature some old school legends.

Rating: 7.75/10
Pairs well with: other episodes in The Comic Book Greats video series.