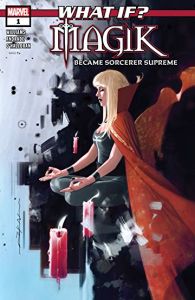 Marvel has had several different runs with their What If? title. I have always been a fan of it, as it gives us new and different takes on Marvel characters. Usually, they show what happens if characters made different choices or if a major event had a different outcome. I couldn’t read enough of these when I was a kid and in a lot of ways, when I first came into comics, it was What If? that pinpointed the moments throughout Marvel history that were the most pivotal.

This 2018 miniseries was only six issues and all of them were unfortunately released over just five weeks. I wish they would make this an ongoing series again or at least spread them out more.

Like the X-Men: Black miniseries, which also came out weekly over October, this had different creative teams with each issue and it showed.

The six stories in this series were What If Flash Thompson Became Spider-Man?, What If X-Men? (not a clearly defined title), What If Peter Parker Became the Punisher?, What If Marvel Comics Went Metal with Ghost Rider?, What if Thor Was Raised by Frost Giants? and What If Magik Became Sorcerer Supreme?

Out of the six titles, the only ones I really enjoyed were the Magik and Punisher ones. Thor and Flash Thompson were okay but the X-Men one was a mess and the Ghost Rider one was one of the worst comics I’ve read in several years. I mean, it was beyond atrocious and getting through it was a hell of a chore.

Marvel could rectify their problems with this series, if they don’t rush them next time. If this was a regular monthly series like it was at its peak, the stories would probably have more time devoted to them.

Some of the art even felt rushed and half assed.

Ultimately, I liked a few issues but I can’t really recommend the series over all.

Rating: 5.5/10
Pairs well with: old school What If? comics, many of which have been re-released for $1 under the True Believers imprint.