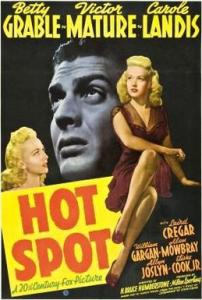 “I’ll follow you into your grave. I’ll write my name on your tombstone.” – Ed Cornell

Coming out in 1941, this was a film slightly ahead of its time. Film-noir really hadn’t taken off yet but this certainly fits within the framework of the style in both the narrative and visual aspects.

There is a murder of a rising starlet. The situation pulls in her sister, her former manager and everyone else that floated within her orbit. There’s even a hulking cop that takes tremendous liberties with his job in an effort to try and pin the crime on the former manager.

This picture’s plot is well structured and it’s not an easy one to figure out. One line of dialogue tipped me off to who the killer was but I still wasn’t sure and even that was followed by a lot of twists.

The film was really carried by the acting talents of both Betty Grable and Victor Mature, a guy whose work I always want to see more of. I really loved both actors in this and Mature was superb at coming off as a bit sleazy in the beginning but slowly evolving into a lovable and romantic hero.

Carole Landis was also great as the sister who ends up murdered. While I think that Grable was definitely the show stealer, Landis held her own and to be frank, the two ladies are absolutely gorgeous in that old school Hollywood way that will just never exist again.

The film was directed by veteran H. Bruce Humberstone, who wouldn’t do much in the noir genre after this but certainly made his mark with this picture. He had a great eye for mise-en-scène and also had the help of cinematographer Edward Cronjager, who would go on to do the noir picture Desert Fury, as well as some notable westerns. But Cronjager also had dozens of pictures to his credit before this one. In fact, he was one of the more prolific directors of photography in his day with 117 credits.

The only thing that works against the film is the score, as a lot of the music is recycled from other films. There’s even different instrumental versions of “Over the Rainbow” sprinkled throughout the picture, which just felt strange and out of place. But that song predates The Wizard of Oz even.

I Wake Up Screaming definitely had an impact, even if it’s not so well known today. It was remade in 1953 as Vicki, which wasn’t as good as this but was still pretty solid.

This is an underrated film that probably should have a bigger light shown on it. Solid work by everyone working on it at every level, minus the score.

Rating: 7.5/10
Pairs well with: Other noir pictures: The Glass Key, The Blue Dahlia and This Gun for Hire.