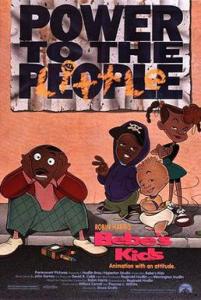 “I am pissed off to the highest level of pissivity.” – Robin Harris

I saw Bébé’s Kids in the theater when I was thirteen. I watched it again a few years later but I haven’t seen it since the ’90s. But being that I always loved Robin Harris’ comedy act and having rewatched the first House Party recently, I wanted to also go back and revisit this, which took Harris’ most famous reoccurring comedy bit and turned it into an animated film. It was also written by Reginald Hudlin, the writer and director of the first House Party, a film where he worked with Harris.

While this isn’t a classic and it doesn’t boast animation worth praising, it still works for me. I thought the bits were still funny and even though Robin Harris died before this was made, I thought Faizon Love did a stupendous job of providing the animated Robin with a voice that encapsulated his unique spirit and energy. This was also the first credit to Love’s name and for him to be able to do this so well, is pretty impressive.

A funny thing that caught me off guard is that I forgot that Tone Lōc did the voice of the baby, Peewee. Lōc really steals the show in every scene that he’s in. You also get some voice work by Nell Carter and John Witherspoon.

This is a fun, silly movie but it has a good heart. It’s message and it’s purpose are noble and it actually hits you in the feels, which you just don’t expect when spending the majority of this film watching these jerk kids destroy a theme park while making everyone’s life hell.

Bébé’s Kids probably won’t resonate with most people in 2018 but I still enjoyed the hell out of it. Maybe some of that is nostalgia or my love of Robin Harris but it still hits the right notes for me.