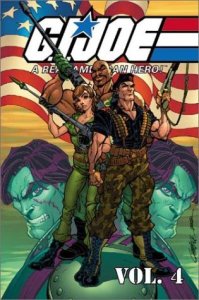 The collection before this one, as well as the back half of the one before that, got more into longer epic stories that carried over from issue to issue. This collection gets back to being more episodic like the earliest volumes. I prefer my G.I. Joe stories to be larger and having multiple issue arcs but this string of issues is a good balance between the two, as some plot threads continue to be sewn into the larger tapestry.

This collection also introduces us to Lady Jaye, Flint and the Cobra twins: Tomax and Xamot. It also starts the Billy storyline, which I don’t want to spoil but he’s a little kid with ties to Cobra Commander and is initially used by Cobra agents to try and assassinate the Commander.

Most importantly, we get the debut of my favorite member of G.I. Joe, Hector “Shipwreck” Delgado. Now he was my favorite character in the TV series. I just need to see how he stacks up in the classic comics, as I haven’t read these stories since the ’80s and I never got to read the complete saga. It’s also worth noting that Barbecue first appears in the same issue as Shipwreck.

While this does have a more episodic format, the last few issues collected here sort of string together and get back towards giving us a more long-term story.

I felt that Larry Hama and this series really hits its peak with the issues in the collection before this one. However, this continues to build off of those really well. The comic book G.I. Joe universe keeps getting larger, the stakes keep getting higher and this doesn’t feel safe unlike the cartoon.

This is just another solid string of issues, the momentum is still going strong and I’m looking forward to volume 5, which is where Serpentor eventually shows up.

Rating: 9/10
Pairs well with: Any of the original Marvel G.I. Joe and Transformers comics.