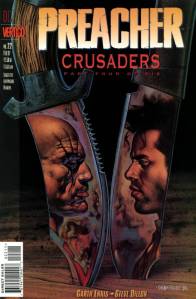 Since I just finished Preacher‘s third season, I am really happy because the show is in a spot that I remember really fondly from the comics: the six-part Crusaders story arc.

No longer owning the Preacher comics I had in the ’90s, as they were lost somewhere along the years and after several moves, I had to round up these issues again. Luckily, my local comic shop had all six issues and in pristine condition, I might add.

It was great revisiting this series and if you haven’t read the comics but are a fan of the show, you can jump right into this story and know where you are. It has some of the stuff from the back end of season three in it and it also goes into what I assume will be the early parts of season four. Ultimately, this is just a badass chapter in the long epic that is this superb series.

Cassidy, the vampire, is captured by Herr Starr and his minions. Jesse has to leave Tulip behind as he goes on an insane mission to rescue Cassidy from The Grail’s fortress. We meet the Allfather, get to learn about the angel that is imprisoned with Cassidy (seen in the season three finale of the show), get some awesome action when the Saint of Killers takes on The Grail in their stronghold and get to see Starr in all his evil greatness.

As much as I like the show, I still love the comic and this just made me realize that I need to give the entire series a revisit.

Garth Ennis was on his A-game here but any fan of comics from the ’90s knows about how great this series was. Steve Dillon’s art still looks incredible and frankly, I wish more comic books had even half of the style that Dillon did here. I also love the Glenn Fabry covers and some of them have become so iconic over time that I may frame a few of these issues.

Preacher is an exceptionally great comic book. Even with a television show, there are just too many people that haven’t delved into the source material. It’s fucked up, twisted and delightful.

For fans of the series, this arc is a high point and ’90s comic book perfection.

Rating: 10/10
Pairs well with: The other Preacher stuff, as well as ’90s Spawn and Garth Ennis’ run on Shadowman.