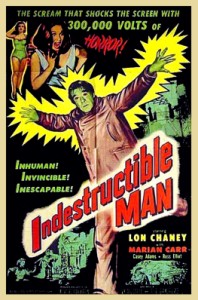 “Remember what I said. I’m gonna kill ya. All three of ya.” – Charles ‘Butcher’ Benton

It stars Lon Chaney Jr. which used to mean something a decade and a half before this came out. By the time the younger Chaney got into the ’50s, he was mostly relegated to starring in complete schlock. Sometimes there was a good role for him, like Roger Corman’s The Haunted Palace alongside Vincent Price in 1963. Most of the time, however, this was the shit that Chaney was stuck doing. I probably would have turned into a fat, cranky alcoholic too.

The story is about a killer that is experimented on because that always works out well. His skin becomes indestructible and he can’t be killed. Well, he can be burned and get disfigured from fire, as we see towards the end. He can also die of electrocution, as he takes his life that way in the chilling climax. But yeah, other than that, he’s indestructible.

This is a short, shitty motion picture with terrible acting, abysmal directing, no artistry in anyway whatsoever and is about as entertaining as watching some old guy in front of you in the Golden Corral line confused about whether he prefers vanilla pudding or banana.

But luckily for us, the film was lampooned by Joel and the ‘Bots on an episode of Mystery Science Theater 3000. If you have to watch this film, you probably need to talk to a therapist. But if you insist, watch it via MST3K and at least laugh along with how mundane and awful it is.

Rating: 3/10
Pairs well with: World Without End, and then a long list of 1950s horror/sci-fi MST3K featured films.

One thought on “Film Review: The Indestructible Man (1956)”