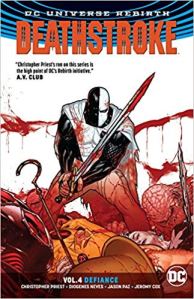 This is the biggest storyline so far in the current Deathstroke series. It sees Deathstroke try to further atone for his past sins while becoming the leader of a new group he has formed with his children and a few former Teen Titans.

This has been the biggest and most popular story in the most recent and ongoing Deathstroke series. So once I got to this volume, I was really excited to jump in, especially with all the plot threads leading up to it being fresh in my mind. There are several characters that this series is trying to balance but it has done a good job, so far, of keeping things moving and flowing properly.

And sure, Deathstroke is often times overshadowed by other characters in his own series but it all ties directly to him and his journey since the current series started.

The biggest problem with this chapter, however, is that it doesn’t wrap up within this volume. The Defiance team’s story carries over into what will be the next installment, which isn’t released for a few more months. I’d like to jump into it while this is all fresh but I guess I’ll have to pickup a few of the single issues I’m missing to fill the few holes in my collection.

What I like about this though, is that it feels like a throwback to Cable coming into New Mutants and eventually forming X-Force. There are some parallels to it and it makes this feel like something I would have read in the early ’90s when I was first getting into comics at a deeper level.

This is capped off by a story that sort of interjects itself into the Defiance plot and forces the series to switch gears momentarily. But that story was really cool and pits Slade Wilson against several of DC’s top villains who are trying to test if he has turned over a new leaf or if he is still “evil” at his core.

This was a good collection but it leaves you hanging.

Rating: 8/10
Pairs well with: The other Deathstroke stories since DC’s Rebirth. Also, the current runs on Nightwing and Red Hood and the Outlaws.