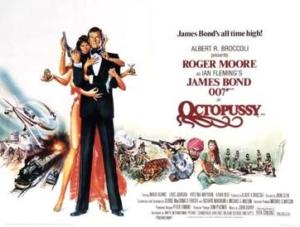 “You must be joking! 007 on an island populated exclusively by women? We won’t see him till dawn!” – Q

This is a James Bond film that I hadn’t watched for several years. While I love Roger Moore, his era was the cheesiest of the Bond franchise. I’ve never held most of his films in the same regard as I do Connery’s or Dalton’s or the one that Lazenby was in. However, Octopussy, while cheesy, is still a pretty good chapter in the franchise. And like other Moore Bond movies that I’ve revisited recently, it’s better than I remembered.

A lot of this film takes place in India, which is really cool. The series has gone to different parts of Asia but the Indian element enhanced the film. Also, the country felt like a character in this movie. There are a lot of cultural jabs, however, which may seem weird and cringy in modern times, where we live in an overly politically correct society, but it’s not anymore offensive than Indiana Jones and the Temple of Doom. But the beauty of the environment and the architecture really gave this film a cool visual aesthetic.

Speaking of which, I absolutely love the set design in this picture. It may have the best set design and attention to detail of any James Bond film before the modern Daniel Craig era. Everything in this film looks great from the villain’s war room, the villain’s palace and every other prominent interior set.

This chapter in the series also has one of my favorite opening sequences in the franchise. The plane through the hangar scene still looks great today.

I also like the Bond Girls in this film. Maud Adams was spectacular and Kristina Wayborn blew me away with her beauty. I was crushing on her hard when I was a kid in the ’80s.

Octopussy may have been a name I was afraid to say in front of my parents in the mid-’80s but it was a film I liked and one of the first James Bond experiences I ever had. My uncle used to rent this thing on VHS constantly.

It is also worth mentioning that 1983 saw the release of two James Bond movies, this one and an unofficial remake of Thunderball, which starred former Bond, Sean Connery. This film is the better of the two and the public and critics agreed at the time.