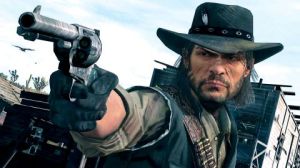 *Written circa 2010 when I was running a blog about politics and economics.

*There be spoilers here!

Rockstar Game’s Red Dead Redemption may be one of the greatest games I have ever played. It has taken over the last several months of my life, well at least when I have had free time anyway, and it has, in my view, successfully painted a world reflecting the last days of the Old West.

Being a fan of the western genre, I have found Red Dead Redemption to be the greatest representation of that genre ever created for a video game. Like the Grand Theft Auto series, from the same developer, Red Dead Redemption is a game that is seemingly endless, even after beating the single player story mode. There are so may other quests to do and just roaming the countryside and having the freedom to do whatever you wish provides the player with infinite possibilities and hours upon hours of just being sucked into the Red Dead world. The plot is multilayered with several wrenches thrown into its already twisting machinations. However, underneath it all, there seems to be a political philosophy. Now, I am not saying that the Rockstar staff put this philosophy there intentionally but nonetheless it is there. I really just think that the philosophy is a reflection of the times and the life of the characters within the world of the game. The fact that a multilayered philosophy even exists in this game is a testament to the skills of the game’s developers.

To start, the main character, John Marston, was an ex-scumbag who used to run with a gang that murdered and stole. At the start of the game he has already fallen in love, got married and had a son named Jack. Marston, for the sake of his family and his soul, has renounced who he once was and is trying to stay on the right path. That is, until big government BOI (today’s FBI) agent Edgar Ross takes Marston’s family away from him. The only way Marston can get his family back is by working for Ross. Essentially, Ross wants Marston to hunt down and kill all the members of his old gang. However, Ross isn’t the most ethical of agents and there are several twists, turns and surprises that await John Marston on his journey. With that said, the game is about a man’s struggle to work within a corrupt system and to persevere, all while doing it just to achieve his dream: to live on a farm, with his family in peace and quiet with no one (including the government) to bother them. Isn’t that what we all want really? Well, maybe not the farm part.

John Marston’s desire to work hard and never quit, even within the nefarious system, in an effort to achieve his goals and save his family, is heroic. His desires and his actions and his personal philosophy throughout the game are almost libertarian. Hell, one could even make a solid argument that his spirit and personal philosophy was a precursor to Objectivism. He strongly opposed the corrupt big government policies and intrusion into people’s lives, in the U.S. and also in Mexico. In fact, on both sides of the border, he worked within the evil machine only to liberate himself from it and to fight against it. In the end, his fight for freedom and his family cost him his life. Although, he did save his wife and son and he died fighting, opposing corruption, betrayal and tyranny with his last breath.

In the spirit of libertarianism, Red Dead Redemption teaches the player about owning up to your actions and how to be personally responsible for them all while attempting to redeem yourself for the negative aspects of your character. Well, as John Marston anyway.

It also shows the horrors of a government that is too large and how that large government is infringing upon the rights of its people. Many of the more patriotic characters within Red Dead Redemption are incredibly vocal about this. In a lot of ways, unintentionally or not, some of the characters in the Red Dead world could fit well within the Tea Parties of today.

Taking place in 1910, the United States itself was at a major turning point. The industrial revolution was well underway and capitalism was at its peak. The world had also already come to recognize American Exceptionalism. Capitalism in its best forms and worst forms was very much on display in Red Dead Redemption and really left a lot to be analyzed by both sides of the coin: those who are pro-capitalist and those who are anti-capitalist.

However, I’m not going to go on a rant here about the differences between true capitalism and crony capitalism and how government’s involvement in that system is severely destructive and counterproductive to the whole thing. What I will say is that you ought to play the game and witness how capitalism, industrialization and American Exceptionalism killed the Old West and brought us into the future and out of the dark ages.

Another political aspect in the game, probably also unintentional but a part of the game nonetheless due to its awesome representation of life in 1910, is women’s rights. Yes, there are prostitutes all over the place but Marston refuses their advances, out of respect for his wife, and he treats them all with respect.

The other women in the game are all just as tough as the men and they do not back down and run from fear, danger or the corrupt and evil forces that they are faced with. In fact, they stand strong, run their businesses despite a tyrannical government with their hand in it and are just as helpful to John Marston as all the lawmen and combat experienced gents in the game. Essentially, the game paints women as equals to men, even though it takes place in a time when women were viewed as simple homemakers. I feel that the game more accurately portrays the women of the time, as opposed to the entertainment of that era, which was propaganda driven and helped hold women back in their “roles”.

Nowhere else is the spirit of freedom alive in the game then in the second act when our hero, John Marston, turns his back on the corrupt Mexican government, who he was briefly working for, and uses all of what he has learned about them to help the rebels build their long overdue offensive.

Storming the giant villa in Escalera is chilling. Although the rebels are pushing for social reform and their efforts may seem similar to Castro and Che in Cuba, it still gives you a rush, knowing that you are bombarding a well-armed and well-manned fortress to overcome tyranny and establish freedom for people who want nothing other than to tear down a corrupt regime. This is one of the greatest battles in the game and once tyranny in Mexico is seemingly destroyed or at least severely compromised, Marston returns to America to fight for his individual freedom against another corrupt regime.

I can’t honestly say that the game sits on one side of the political fence or the other. It is just a great representation of life in 1910 and it really leaves a lot open for interpretation. I know where I stand with it and a lot of what is going on in this game is timeless. So much of it rings true with what is current now and it is a true testament of political struggle, which represents today just as much as it does yesterday. Red Dead Redemption is definitely one of the best-written games of all time and politically, it has enough guts and enough meat to keep the politificionados talking for a long time.