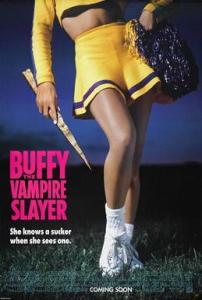 “Does the word “duh” mean anything to you?” – Buffy

Joss Whedon wasn’t a fan of this version of his Buffy character and five years later, he developed a television series that reflected what he saw in his mind. Most fans prefer the television show but I guess I have to be the odd man out or maybe it’s because I am often times a contrarian but I prefer this movie. I’ll explain though, that’s why I’m here.

First, I have always loved Kristy Swanson. This isn’t a battle over who is hotter between Swanson or Sarah Michelle Gellar, as both are gorgeous, but Swanson’s personality and the way she played this role was more my cup of tea. And if Buffy is going to be a valley girl high schooler, Swanson fits the part better for me. Not to discount Gellar’s work because she was great in her own way and played Buffy as a much more complex character. But let’s be honest, she also had seven seasons and 144 episodes to grow in that role, Swanson had less than 90 minutes.

I also love the supporting cast of the movie better. I mean the villains are Rutger Hauer and Paul Reubens for chrissakes! And man, both of those guys ham it the hell up in this and just fit the tone of the film perfectly. Reubens ad-libbed in a lot of scenes and it made for a better movie and for a more entertaining character.

You also have Luke Perry, at the height of his popularity, and I’m not afraid to admit that I watched Beverly Hills 90210 during its peak. It was the hottest show on television and I was in middle school. Plus, I met Luke Perry when I was young, just by coincidence, and he was really f’n cool.

This movie is cheesy as all hell but it is supposed to be. It captures that ’90s teen vibe really well but overall, this is just a really fun movie that I can put on at any time and still enjoy for its absurdity and its awesomeness.

I knew that once the TV show came out, that we’d never get a proper followup to this version of Buffy. But since the TV show has its own comics, it’d be cool if someone did a comic book sequel to this incarnation of that universe. Or hell, maybe even a Buffy vs. Buffy crossover. Who owns the comic book rights now? IDW? Dark Horse? Boom? Dynamite? I don’t know but whoever it is, get on it!

Rating: 7/10
Pairs well with: Other ’90s teen horror comedies: Idle Hands, The Faculty, Freddy’s Dead, etc. I also like pairing this with Encino Man for some reason.