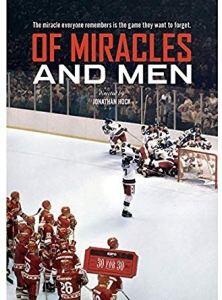 This was one on the more recent 30 For 30 films put out by ESPN.

This documentary covered the Soviet Union’s national hockey team during their dominant heyday and showed the famous “Miracle” game from their perspective, which provided a pretty unique take on the event.

Of Miracles and Men starts off by showing us how the Soviets developed their hockey game and the unorthodox approach to coaching that its founder had.

Unable to study the renowned Canadians, who made the sport famous, the Soviets taught themselves how to play from the ground up with no point of reference. Their coach analyzed everything he could outside of hockey and thought of ways to incorporate these things into the Soviet training routine. He took methods from dancing, weightlifting and other places. All of this showed how the Soviets developed such a refined style that was all their own at the time.

The documentary goes on to show the growth of hockey in the U.S.S.R. and how the nation developed immense pride for their athletes and the sport. All of which eventually lead to them playing some exhibition games against Canada.

Where here, in America, we are told of the legend of the “Miracle” game from a very pro-American stance. This documentary shows the tale in a much more realistic light and provides the back story in a way that is more fleshed out than any version I’ve ever heard.

In the end, the Soviets weren’t so bloodthirsty about us, as we were of them. In fact, when they lost, they were more upset that they lost and weren’t looking at it as a failed attempt to topple America. In fact, they had toppled us quite a bit before this game and have toppled us after. Truthfully, the Soviets owned America historically. And today, the Russians still regularly kick our ass, even though we have amazing teams year after year.

An example one of the Soviet players gave in the film, is that this is like a fan of Sophia Loren who gets to kiss her. Years later he is still talking about the kiss. However, if you ask Loren about it, she probably doesn’t even remember it.

If anything, this film opens the viewers eyes to the propaganda machine.

In its simplest form, the “Miracle” game was a game played between really young athletes who just wanted to play the game because it was what they enjoyed doing. Athletes who were probably too young or focused on the game, to fully understand what was going on between these two countries politically.

In comparison to other 30 For 30 documentaries, this one fits in the upper echelon in terms of quality. The editing, interviews and narrative were fantastic. I just wish ESPN did more 30 For 30 films on hockey. I think this is only like the third one out of 60 plus films.