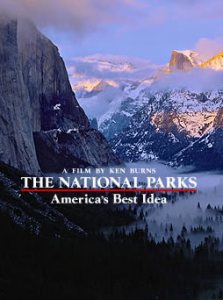 After being enthralled by Ken Burns: Baseball, I will watch anything that this guy creates.

The National Parks: America’s Best Idea is a pretty inspiring piece of work and arguably a masterpiece. If you are familiar with Ken Burns’ directing style, you can expect more of the same. However, with the wonderful presentation, the fantastic narration and just the scope and beauty of the subject matter, this documentary is truly a sight to behold and an enchanting foray into almost endless and unfathomable beauty.

For a guy who likes the outdoors much more than the indoors, this motivated me to give an even bigger shit than I do now about conservation and the importance of our parks, not just National but all parks. It also put into perspective how amazing America is as far as natural wonders. In this country, we are literally sitting on a nature goldmine.

This series is broken into six episodes roughly two hours each, give or take a few minutes. Each part goes through different eras of the National Park System from the beginning up to modern times. Each part is thoroughly engaging and packed with more information than anyone could anticipate. Each part is also sprinkled with guest narrations from several recognizable voices, my favorite of all to pop up is Tom Hanks, who presented his lines majestically.

I love this documentary series. Ken Burns really outdid himself and PBS needs to always give him a platform to display his artistic and informative creations.