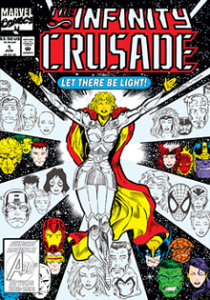 Well, I read through the great Infinity Gauntlet storyline and followed that up with the mediocre Infinity War sequel. Naturally, I thought that I should finish the trilogy of Infinity stories with this one: The Infinity Crusade.

However, I wasn’t a fan of Magus and his whole shtick from the previous chapter in this large saga. The reason why I’m pointing that out here is because the setup is essentially the same. Where Magus was the physical embodiment of Adam Warlock’s evil side, the big threat in this story is the physical embodiment of Adam Warlock’s good side. I admit, I rolled my eyes when I was reminded that this was the setup to this story.

Frankly, I thought the plot was lame and what was even lamer was the McGuffin. No longer was the focus on the Infinity Gauntlet, now the focus was on this “Goddess” character and her Cosmic Egg. Basically, she just sits around in her giant cosmic egg using religion to brainwash a large group of heroes to be her holy army. So this is like Civil War but with religion and a giant friggin’ egg.

It also doesn’t help that there is virtually no action, this is overly talkie and just boring. Well, to be fair, the fifth issue in the six issue arc was just straight up action. But outside of that, there wasn’t anything exciting other than a few brief physical spats and some cosmic magic battles, the biggest of which featured psychically projected heads shooting laser beams at the “Goddess”.

Plus, the story suffers from being spread over several different titles. So when I read the collected edition of the main comic, there is key stuff missing from it, as it happened in another issue of a different title altogether. I get that this is how crossover events work but the two previous Infinity sagas kept the main story in the main title and the other comics just had tie-in subplots.

This whole mega event is just proof that Marvel was milking the Infinity thing way too hard. The Infinity War was just okay and then this was a disaster. Neither of them came as close to the greatness that was The Infinity Gauntlet.