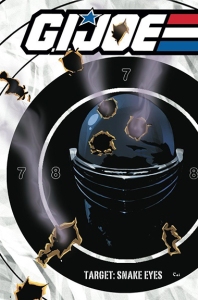 Published: April 2nd, 2013
Written by: Chuck Dixon
Art by: Will Rosado, Alex Cal
Based on: G.I. Joe: A Real American Hero by Hasbro

Target Snake Eyes is the culmination of several stories. It is a conclusion to all the stuff that happens after the big Cobra Command event, which followed the massive Cobra Civil War crossover.

Additionally, this sets up the new comic book series G.I. Joe: Special Missions, which happens alongside the events of two other new titles, G.I. Joe: The Cobra Files and G.I. Joe (the third main series for the franchise at IDW). This list here will help you make sense out of the timeline and the multiple titles since IDW is pretty confusing on how they release G.I. Joe stuff.

This kicks off with G.I. Joe and Cobra hunting for Snake Eyes and his Arashikage ninja brother Storm Shadow. Snake Eyes is believed to be working against the Joes and Storm Shadow has taken his clan and left Cobra. Snake Eyes has his own agenda, as that’s sort of his modus operandi. This eventually leads to Storm Shadow feeling betrayed and a rift forming between the two, once again.

Target Snake Eyes also deals with Joe and Cobra teams that aren’t in great shape. The Baroness comes up with a massive scheme to give Cobra a lot more power but the scheme fails and she finds herself in the crosshairs of Cobra Commander.

There is a lot of Serpentor, Coil politics, Arashikage politics, Cobra politics, Joe politics and a big crescendo that finishes the story and gives you a sense of narrative completion other than a few open ended bits that will carry over into future story arcs.

Overall, this is a really good book if you are a fan of the ninja side of the G.I. Joe universe.