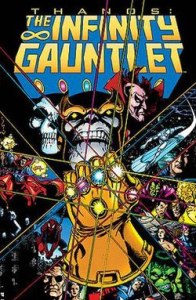 Since the new Avengers movie is coming out very shortly and it is about Thanos and the Infinity Gauntlet, I wanted to revisit those stories in their original comic book format. This is the first of The Infinity Trilogy, which also features The Infinity War and The Infinity Crusade.

This was the biggest Marvel mega crossover event of my most formative years. I had read Secret Wars I and II, as well as some of the major X-Men centered mega events before this but this one, at least when I was a preteen, seemed like it was legitimately for all the marbles like nothing else that came before it. Therefore, when it was revealed several years ago that the Marvel Cinematic Universe was building towards Thanos and his acquisition of the Infinity Stones, I knew that the third Avengers movie was going to be the biggest cinematic event in the history of comic book movies.

But how does the original body of work stack up now, two and a half decades later?

Well, it’s still really damn good and was a heck of a read.

The story is comprised of six beefy oversized issues. The first three serve to set up the final three, which cover the massive space battle between Thanos and everything the Marvel Universe could throw at him. The first half is a bit slow but it is necessary to understand what is happening. The fourth issue throws Earth’s heroes at Thanos, the fifth issue throws Marvel’s cosmic entities and gods at Thanos and the sixth and final issue sees Nebula acquire the Infinity Gauntlet, causing Thanos to have to reassess his place in the order of the universe.

I think that the biggest difference between this classic version and the upcoming film adaptation is that the build will be much different and it should be.

Here, Thanos is motivated by the petty idea that he can use the Gauntlet to win over the heart of Death. While it does work for the comics, it isn’t something that could really work on film, at least not with a lot more narrative work than the Marvel screenwriters will have time for if they also need to focus on wedging every cinematic hero into the film. By modern standards, Thanos’ motivation seems cheesy but I’ll buy into it because it isn’t something that I couldn’t see the character doing. He’s flawed and egomaniacal, and he would be driven to win over what he feels he cannot have.

I liked where this story went, how it challenged the heroes, how the writers worked it so that Thanos wasn’t “omnipotent” and how it all panned out in the end.

The Infinity Gauntelt is still a great Marvel mega crossover event that deserves the recognition and legendary status it has.