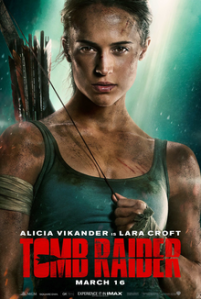 “All myths are foundations of reality.” – Lord Richard Croft

I wasn’t super enthused to rush out and see this, as I have never been a huge fan of the video game series. I certainly didn’t dislike the series, it was fun and entertaining enough, but I gravitated more towards the Uncharted video games, once they started.

I also wasn’t a big fan of the original Tomb Raider movies. I mean, they were okay for what they were but they certainly weren’t classics and really just existed to take advantage of Angelina Jolie’s good looks during her peak in popularity.

This remake or reboot or whatever, is much more grounded in reality but even then, it still comes with a certain degree of ridiculousness. It tries to be the dark, gritty reboot that is so cliche by this point and really, it is more like a reinvention of the series, as the modern Tomb Raider video games have been.

Overall, this just isn’t very good. There’s not a lot to sink your teeth into. The story is thin, boring and this entire movie just feels like the opening mission of an adventure game that happens before you even get credits.

There actually isn’t a lot of treasure hunting and “tomb raiding”. Sure, they raid a tomb but it takes forever to get there and it’s not all that exciting. The tomb is actually dull and uninspiring. It’s nothing like what you would see in an Indiana Jones movie or one of the Uncharted games.

Most of the film is about Lara searching for her dad instead of treasure. I get that you need a “selfless” reason to get this “heroic” character to the island with the treasure but the film was sold as a high adventure, treasure hunting movie and not what it should have actually been titled Lost Daddy Island.

I wanted lots of solid “tomb raiding”. Lara Croft should have been searching dungeons, solving puzzles, opening doors and getting cave dirty. Instead, she ran around an island for well over an hour doing jungle parkour.

Granted, I really like Alicia Vikander. She was better than Jolie as the character of Lara Croft, although Jolie looked more the part. I’ve never been high up on Jolie though. Vikander has the right attitude and right edge and she could do great things with this role in future movies if any more actually get made and if she works off of a better script than this one.

The biggest highlight for me should have been Walton Goggins, who I love in everything – even that third Major League movie. However, he wasn’t exciting and just sort of a poorly written, cookie cutter baddie. He didn’t give the role that Goggins charisma or really, any of his personality. I felt like anyone could have played the part the same. Goggins is best when his roles allow him to put himself into the part. I’m not sure if he just dialed it in, the director was too controlling or if the script was just so boring that he couldn’t salvage his part.

I guess the actual biggest highlight was seeing Nick Frost in a cameo. Well, he appears in two scenes, so I guess that’s bigger than a cameo.

Tomb Raider is pretty uninspiring. But there is actually a foundation to something that can be much better. Fire the director, fire the writer, keep the cast, move forward.