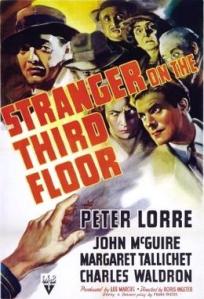 “I want a couple of hamburgers… and I’d like them raw.” – The Stranger

Stranger On the Third Floor is a film-noir released a year before the experts say that the genre/style began. The Maltese Falcon is widely considered the first, even though it isn’t. But like that film, this one also features the remarkable Peter Lorre.

Maybe Stranger On the Third Floor isn’t considered “the first” noir because it came and went without making much of a bang. It was a low budget, short, crime drama that didn’t boast any big stars. Lorre certainly wasn’t the legend he would become and even though it did have Elisha Cook Jr., who also appeared a year later in The Maltese Falcon, he was never more than a character actor that popped up in mostly limited roles.

Stranger On the Third Floor has come to garner some respect and admiration over the years, however. Once film-noir was sort of defined and the date of its genesis was given to 1941, many film aficionados wanted to go back and look for the films that influenced the style. Sort of proto-noir pictures, if you want to call them that. Funny that Lorre was at the forefront of two of these proto-noirs: this film and 1931’s German masterpiece M. I guess his film with Hitchcock, 1934’s The Man Who Knew Too Much, also shares some similarities to the style.

There are two really strong things about this picture.

The first is Peter Lorre’s performance. Sure, it’s similar to his other early roles and almost the same as his character from M, well not the child killer part, but the killer part, along with the mannerisms, the predatory movements and his icy glare. Lorre isn’t an actor that needs to say much of anything, he conveys things through his eyes and his body language that is as expressive as the greatest silent film era stars. That moment where Lorre opens the apartment door and slithers out like a reptile is chilling to the bone, even 78 years later.

The second is the cinematography. The lighting and the camera work are both exceptional. The film uses a lot of shadow in the same vein as the look of darker German Expressionist films. Although, the rest of the visuals aren’t all that surreal. But the high contrast chiaroscuro look gives the picture a haunting quality and it seems to most come alive in the scenes surrounding Lorre’s character, as the rest of the film looks pretty standard where he isn’t present. Well, except for that execution dream sequence that is a combination of surrealism, Expressionism and minimalist set design: all used to great effect.

The finale of the film plays more like a horror picture in how Lorre carries himself, how the film builds tension and dread, as well as those final moments before the killer meets his demise and that last line he delivers. In a way, the film shows a sort of link between Expressionism, horror and noir.

Stranger On the Third Floor is a unique motion picture that was more trendsetting than its lack of initial success would have you believe. Even if it didn’t inspire most noir directors of the era, it featured a lot of people, behind the scenes, that would go on to create the worlds of more notable film-noirs.

Rating: 8.25/10
Pairs well with: Other film-noir-esque movies with Peter Lorre: M, The Maltese Falcon, The Man Who Knew Too Much, Three Strangers, Black Angel and Quicksand.