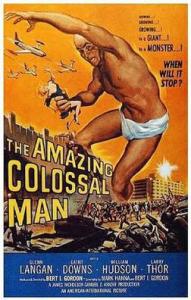 “What kind of sin could a man commit in a single lifetime to bring this upon himself?” – Manning

Bret I. Gordon loves his giant monster movies. The Amazing Colossal Man is actually part of a two movie series with its sequel War of the Colossal Beast. The monster is the same character in both films but in the sequel half of his face is a skull. Here, he’s just some dude in a diaper. I prefer skull-faced diaper dude much better.

Like its sequel, this film was lampooned on Mystery Science Theater 3000 during the Joel Hodgson run. It makes for a good episode but the film on its own is hard to get through minus a few scenes like the awesome one shown below this review.

Basically, this soldier grows to a massive size and decides to kick the crap out of Las Vegas. This is an anti-nuke movie, as atomic fears were very high in the 1950s and Hollywood loved to capitalize off of that. While this is extremely dated and wasn’t that good, even for its time, this is a nice nostalgic look at that era’s technophobia.

I prefer anti-nuke movies with giant insects or reptiles or animals of some sort. At least I can suspend disbelief and enjoy the creature effects or the forced perspective awkwardness. When the threat is a giant man, albeit one in a diaper, the film becomes more silly than anything. But I guess these were essentially American kaiju pictures but Hollywood just didn’t have the creativity of Eiji Tsuburaya, the special effects director on most of Toho’s Japanese kaiju pictures.

The Amazing Colossal Man isn’t good but it also isn’t a waste of time. It’s unintentionally funny but to be honest, the people that worked on this film were probably just having a damn good time making some hokey schlock to throw on drive-in screens across the U.S.

Rating: 2.5/10
Pairs well with: War of the Colossal Beast or Village of the Giants.

One thought on “Film Review: The Amazing Colossal Man (1957)”