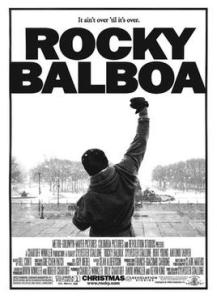 “It doesn’t matter how this looks to other people. If this is something you gotta do, then you do it. Fighters fight.” – Little Marie

It’s been awhile since I’ve seen Rocky Balboa. I really liked it when it came out but at the same time, I was going through some heavy personal shit that this film emotionally tapped into at the time. I lost someone really close to me the day before this film came out and in some way, seeing this film that same week sort of helped me with the grief and guilt of that experience. And frankly, I’ll always associate this film with that experience.

Seeing it, over a decade later, and after having just watched the five original Rocky films, I do still like this picture but it is my least favorite of the Rocky franchise. Yeah, I’m that one weirdo that actually liked Rocky V and was happy with it as the ending to the series.

The thing about this film, is that I think it actually would have worked better without the whole fight element thrown in. But it’s a Rocky film so Rocky has to fight, I guess that’s the rule. I would have been more interested in seeing Rocky deal with his grief in an elderly reality where he can’t fight and certainly shouldn’t be allowed to fight. Eventually, he has to hang those gloves up and I would have rather seen him try to figure out how to overcome his personal demons when his one way of dealing with them is no longer available to him. There are different fights in life than the physical ones and we’ve seen Rocky use boxing as a metaphor for his life from the ’70s into the ’90s. I think that Creed did a better job of finding a way to help Rocky find meaning in his life outside of taping up his own fists.

The thing with the fight and how it all goes down is unrealistic. I just can’t see a boxer as old as Balboa getting cleared to fight the undefeated world champion, whether it’s just some corny exhibition or not. The idea of it also sets a bad precedent of some sort of reality where aged fighters can somehow hang with guys in their prime that are at the top of their game. Sure, this is a feel good story for old men, past their prime, but Sugar Ray Leonard should absolutely never step into the ring with Floyd Mayweather.

Everything else about this film I mostly liked. Rocky owns a restaurant, he is having a hard time with his relationship with his son, he gets to spend quality time with Paulie and he gets to reconnect with a young girl he hasn’t seen since 1976. I also loved Spider Rico’s role in this movie, as he was there for comedic relief but it was cool seeing Rocky still care for his old rival and friend.

Rocky Balboa is a sad and borderline depressing movie. It does have its patented feel good ending but it was unsatisfying in the fact that it was tied into the fight within the film. I would have rather seen him reconnect with his son, find love with Marie and accept that life goes on and he has to go on with it. While it sort of happens, it does so with the fight as a metaphor for everything because surviving a beat down of epic proportions means that your problems are gone until you need to make a sequel.

But I get it, what’s a Rocky movie without a fight? And if Stallone didn’t have his most famous character throw down, people wouldn’t have gone to see the film. What is Rocky Balboa without boxing? But couldn’t that have been the whole point of the film?

Rating: 7.5/10
Pairs well with: Anything within the Rocky franchise. Also, Ryan Coogler’s Creed.