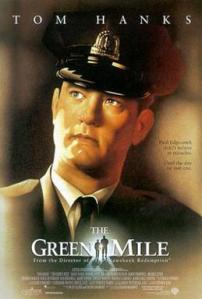 “On the day of my judgment, when I stand before God, and He asks me why did I kill one of his true miracles, what am I gonna say? That it was my job? My job?” – Paul Edgecomb

After Frank Darabont made one of the greatest films of all-time when he adapted Stephen King’s The Shawshank Redemption, he couldn’t have found a more natural followup project than King’s The Green Mile. Both are prison stories and have some similar themes, although The Green Mile is closer to what people are used to from King, as it has a supernatural and magical element to it.

The story follows a prison guard named Paul Edgecomb, played by Tom Hanks with the elderly version played by Dabbs Greer. The story is told as a flashback to 1935 when Edgecomb was running a prison block called the Green Mile. While there, he met John Coffey, a man sentenced to death for a crime he didn’t commit but who also has special powers. Coffey is a giant black man, accused of raping and murdering two young white girls, as he was found clutching onto their bodies while covered in their blood and crying. As the story progresses, we see an intimate look into life in Edgecomb’s cell block and we also come to discover that Coffey is a gentle giant with the ability to heal the sick and to feel a sort of psychic empathy when others are in pain.

The look of the film is pristine. It has a majestic and magical quality to it while still being grounded in a sort of gritty realism. The cinematography was handled by David Tattersall, who worked on the Star Wars prequel films, as well as The Majestic, Speed Racer, Con Air and several other notable films since the early ’90s. He also handled the bulk of cinematography for the entire run of The Young Indiana Jones Chronicles, which was one of the most impressive things to ever hit television screens in the ’90s.

Populating the visually stunning world was a myriad of talented actors. In fact, there are so many great people in front of the camera it is hard to believe that they all worked on this film. Some of them aren’t massive stars like Tom Hanks but they are some of the best people who have worked in Hollywood over the last few decades. The acting is so superb in this that you get pulled in the same way that you do with The Shawshank Redemption. Maybe it’s a testament to how good Darabont is at directing, as he got incredible performances out of every member of this film’s large ensemble. And while I love Michael Clarke Duncan, the man has never been better than he is here.

The Green Mile isn’t a pillar of perfection like The Shawshank Redemption but it is a near flawless companion piece to it.

This film is absolutely stellar in the highest regard. Maybe the running time is a bit long but there isn’t a dull moment within the film. It feels more like a miniseries than a singular motion picture but everything that happens is meticulously crafted and executed and their isn’t an unimportant moment within the film.