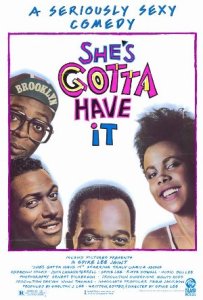 “It’s really about control, my body, my mind. Who was going to own it? Them? Or me? I’m not a one-man woman. Bottom line.” – Nola Darling

Everyone has to start somewhere and She’s Gotta Have It was where Spike Lee, one of the top directors of the last few decades, got his. It is also where his character Mars Blackmon originated from. You may remember Blackmon from all those Michael Jordan Nike commericals from the ’80s and ’90s. I think Lee still resurrects the character to this day, actually.

I wanted to revisit this film, as I haven’t actually seen it in at least fifteen years but I was always fond of it. Plus, Spike Lee has recently rebooted it for a television series on Netflix. Therefore, I wanted to re-familiarize myself with these characters before jumping into Lee’s new take on this story.

You have Nola and you have the three men in her life, all of whom want her and her alone. Each man fills a specific need for Nola but ultimately, what this all comes down to is what does Nola really want and is it any of these three men on their own? It’s a film that explores sex in a way that popular romantic comedies at the time could not. And while most romantic comedies are Hollywood schlock, Spike Lee wrote something truly unique and exceptional here. It really isn’t a standard “romcom”, it’s a motion picture about relationships and people that is populated with amusing, charismatic characters.

I wouldn’t call this a well acted film but each of the main characters feels authentic. And each character is likable in their own way. Well, except for Greer (Terrell), who was such a fraudulent and self-absorbed jerk that you kind of wanted to wish him away. Props to John Canada Terrell though, who gave Greer life and did a great job making him a total narcissistic asshat. Really, you just wanted to see this competition for Nola’s heart come down to Jamie (Hicks) and Mars (Lee). Although, Jamie is a bit of an overprotective meddler that gets a bit rapey there towards the end. Really, I was pulling for Mars.

The point is, it doesn’t matter who Nola chooses, if she even chooses anyone at all. It is a story about her journey and seeking out what it is she needs. Any of these men had the freedom to walk away at any time and Nola was usually brutally honest, even if it didn’t deter the men. At one point, Nola even hosts Thanksgiving dinner with the three men as her guests. It’s a great scene where a lot of the emotional baggage of the characters comes to the forefront and certain stands are taken.

She’s Gotta Have It is a simple movie but it is also complex because people, at their core, are complex creatures. Most people don’t know what they want. Nola is someone that has the courage to try and figure that out. While most would be quick to condone her actions, she has certain qualities that people should aspire to possess. She’s not afraid of her desires and pursuing them in an honest and unapologetic way. Really, that’s kind of badass.

I like this film and it holds up quite well. It’s timeless in a way and maybe that’s just because of how it was shot and the great music. Spike Lee wrote a beautiful script, his father provided soulful tunes and the actors played their parts to perfection. It is a short and sweet film and even if it doesn’t come with a storybook happy ending, it leaves you with a satisfying one.