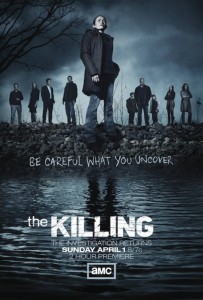 The Killing is interesting as it started on AMC, got cancelled twice and renewed twice. The second renewal did not come from AMC however, it came from Netflix, who picked up the show for its final season.

As interesting as the story of the show’s turbulent history is, the show itself falls flat.

I really wanted to like The Killing. I gave it a real shot, as I stuck around for the duration, even though I wanted to shut it off after just a few episodes.

I thought it may improve or that it was building towards something fantastic. Well, it never really quite got there and the build up was so slow and dragged out that I often times found myself either daydreaming or huffing markers to pass the time. It is rare that I am this bored watching a show but I’d rather watch gnats procreate than see another episode of The Killing.

The acting isn’t good or bad, it is just there. It is about as exciting as the show itself and I felt like the actors were asleep half the time, bored off of their asses because it took two full seasons to solve one crime when Jeff Goldblum on one of those Law & Order shows solves a different crime each week. Maybe these cops are just shitty at being detectives and they should’ve consulted with Jeff Goldblum.

There’s nothing really more to say because frankly, I am even bored talking about the show.

But hey, great cinematography and and technical prowess from a visual standpoint, if I have to throw in something positive.