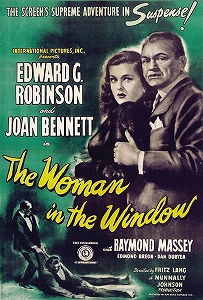 Before the noir classic Scarlett Street, the same team made this movie just a year earlier. In fact, as much as I like Scarlett Street, I would actually have preferred this film to it if not for the lame ending it gave us. It certainly had my attention a lot more than Scarlett Street but due to the time it was made, the morality censors had to make this movie a stupid dream sequence, wiping away the really dark ending that should have capped off the picture without the goofy twist.

I don’t blame Fritz Lang or the stellar cast for the ending though and up until that bizarre moment, The Woman In the Window really is a fantastic film.

Edward G. Robinosn, who has grown to be one of my favorite actors of all-time, has a remarkable chemistry with Joan Bennett. Also, Bennett has great chemistry with Dan Duryea. She works really well with both men and is sort of the glue in these pictures that star all three.

Joan Bennett is also otherworldly alluring in this picture, which may be intentional as the story is a dream and she even plays the part kind of deadpan, like a beautiful specter in the night. She is somehow ghostly emotionless, even while displaying emotion. It is hard to peg her and her character’s motivations. Does she want Robinson to kill the violent man, to free her from him, or was she really just trying to help him survive the attack in her home? You never really understand her point-of-view, which is actually a good thing in this movie. Is she a true femme fatale, clever and manipulative, or is she just a victim of circumstance, a typical damsel in distress?

Getting to the plot itself, it follows Robinson, as he sends his wife and kids off to New York for the summer. Soon after, he meets Joan Bennett next to a painting of her. Robinson seems like a good guy, even though he does go to her apartment for a drink. Once there, he is attacked by an ex-lover and kills him in self-defense. Robinson and Bennett agree to do away with the body and go their separate ways, as they are practically strangers anyway. Robinson then gets pulled into the investigation of the murder, as his best friend is a district attorney. Bennett then gets blackmailed by Dan Duryea’s character, who knows that she has an association with the murdered man. It’s a well layered plot with good twists and turns.

The cinematography is handled by Milton Krasner, who also worked on Lang’s Scarlett Street the following year. There is a real visual and atmospheric consistency between the two pictures. Krasner also worked on other notable film-noir pictures and some of the films from the Universal Monsters franchise. A few of his many credits are: The House of Seven Gables, The Invisible Man Returns, The Ghost of Frankenstein, The Invisible Man’s Revenge, The Dark Mirror, The Set-Up and Rawhide.

The Woman In the Window is a fine picture. I hated the ending but I kind of just ignore it and enjoyed the ride up until that point.