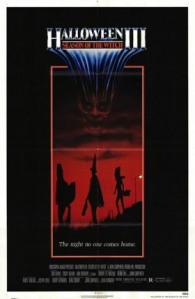 “I do love a good joke and this is the best ever: a joke on the children.” – Conal Cochran

Prepare to be scared shitless. Okay, maybe not shitless. But prepared to feel really uncomfortable, unsettled and really creeped out by this unique and bizarre film that truly is one of a kind.

This film currently has a rating of 4.4 on IMDb. That’s some bullshit and I think that the only reason it rates so low is because it is a film with the name Halloween on it and Michael Myers is nowhere to be found. Had this been its own film with its own name, it would probably not have some weird stigma or Michael Myers fanboy backlash. Then again, had it been called something else, it might not have survived as long as it has, simply because its existence is an enigma.

So why is this a Halloween film when it doesn’t feature Michael Myers or anything related to those stories?

Well, back in the day, John Carpenter didn’t even want to do the Halloween II that we got. His original plan for the series was to have a different story each year for each new film in the series. The studio however, wanted more Michael Myers and an agreement was reached that Carpenter would give them more Michael Myers and he would be allowed to make a third film in the series any way he saw fit. What resulted was confusion. Confusion that led to a big hiatus between this film and the fourth film, which ultimately, brought Michael Myers back to the franchise and saw him go on to star in every sequel and remake thereafter. In the end, this film gets an unfair bad rap and is usually skipped over by those having a Halloween marathon or sneered at when it pops up on AMC during the MonsterFest season. In fact, AMC may be ignoring it now too, as I haven’t seen it in the TV listings this year.

The thing is, this film is great. It is actually one of my favorite horror movies of all-time. I can’t come upon the Halloween season and not pop this into the DVD player. Actually, I’m sure I will catch shit for this, but I prefer this movie over all other films in the Halloween series. Yes, even more so than the 1978 classic that introduced the world to Michael Myers.

This film has the absolute best atmosphere of any film in the series. It is beyond creepy and as a kid, this terrified me much more than some guy in a mask walking around silently and slowly with a knife. There is just something more sinister to a child viewer (me) seeing another child in a film put on a Halloween mask that turns their head into a pile of bugs, worms and venomous snakes in a very painful way. Sorry, this is way more effective than another slasher film. And no, despite claims from everyone, Michael Myers was not the first slasher and the concept of Halloween was lifted from the original Black Christmas and what its director wanted to do with his plan for sequels – an anthology of films all associated with different holidays.

Tom Atkins plays the lead in Halloween III and is as great as always. He’s never a likable character really, he is just a solid actor that doesn’t try to be a hero, he is usually just a typical human male caught up in an inhuman or extraordinary situation.

Dan O’Herlihy (best known as the head of OCP in the original Robocop) is awesome as the evil Conal Cochran, the man who wants to kill the world’s children and pretty much everyone else. His tool of destruction is his best-selling Halloween masks. And although his motivations are never really made clear and his sinister plot never really explained in a way that makes much sense, you know that you are looking at pure evil and he embodies an almost satanic presence.

This film almost has a Lovecraftian vibe to it, mixed with that magic John Carpenter touch and a bit of dark science fiction. Even though Carpenter only produced this film, it promotes his visual style well and it is only enhanced by his majestic and eerie soundtrack.

4.4 on IMDb? People have no fucking taste.