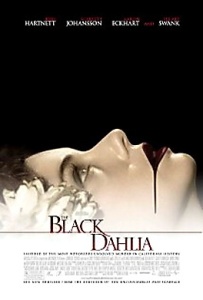 “She looks like that dead girl! How sick are you?” – Kay Lake

For a modern noir picture with a cast this star studded, The Black Dahlia was a real disappointment. It had some positives but it mostly falls flat and is an example of style over substance.

This is not a good example of the work Brian De Palma can do. He is one of the best directors of his generation but this really misses its mark, which is unfortunate, as the subject matter is great and the talent he was able to get in this picture was impressive.

Josh Hartnett is the main star of the picture but his role feels pretty weak. I don’t feel like it is Hartnett’s fault, I feel like it is the direction of De Palma and the emotionless script. However, Hillary Swank, who is more talented than this film is able to show, is kind of just in this movie. It doesn’t really matter that it is her.

Although, everyone else does seem to work with the material. I thought that Aaron Eckhart and Scarlett Johansson were really good in their scenes and Patrick Fischler, a guy who is in everything but doesn’t get the notoriety he should, knocked his scenes out of the park. You also get to see Mike Starr and Troy Evans, two guys who do a lot of cop type roles but always bring their best to the table.

The real scene stealer however, is Mia Kirshner, an actress I’ve been mesmerized by since first seeing her in The Crow: City of Angels, a film where she was the only positive other than the murderous psycho biker played by Iggy Pop. Kirshner truly owns her role in this picture and it may have been the best she’s ever been. She’s really the only character in the film that you feel any emotion for. Honestly, it’s been eleven years since this came out and she should have gotten more prestigious roles but maybe her work was overshadowed by this being such a lackluster film.

Now, despite the overall film falling short, the visuals are top notch. The cinematography is unquestionably superb. Everything within the film feels true and authentic, even the bizarre K.D. Lang performance that pops up in the middle of the movie.

The narrative and the big reveal at the end were all pretty poorly strung together, though. It just made the film too bizarre and frankly, pretty fucking stupid and just really annoying after sitting through this two hour mess.

Typically, I like the work of Brian De Palma. This one just misses its mark.