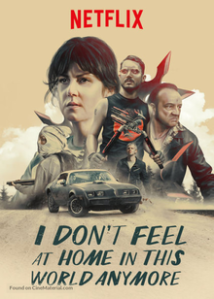 I have always liked Melanie Lynskey and even thought that Charlie Sheen was an idiot for not hooking up with her on a full-time basis on Two and a Half Men. Mainly, because she was much better than the typical girls Charlie dated, even if she was a bit crazy.

Elijah Wood has always been an interesting actor to me, working in so many great independent pictures and even being the centerpiece of a massive blockbuster franchise with the Lord of the Rings trilogy.

Seeing these two come together for this film really peaked my interest. Plus, Jane Levy, who is making a name for herself in pictures with a darker tone, is also in this and I’m growing to like her as I see more of her.

Sadly, despite this film getting off to a great start, things quickly fizzle out and get a bit too over the top in a way that seems too forced.

The film starts out as an endearing sort of romantic comedy about a woman that is sick of the world and the people in it. She finds a weird but pretty cool guy and they go on an adventure together, trying to track down her stolen stuff. The film then gets darker and darker to the point where it is hard to keep the emotional connection you made with these characters earlier on in the film and honestly, you completely lose touch with them.

It is mostly enjoyable but it started out looking like it could be something exceptional and it just released its hold on you and became a disheveled mess. Suddenly, it was like it was trying too hard to be cool and shocking and the last act of the film just felt misguided and out of place.

I mostly liked the movie but ultimately, it let me down.

Also, the filmmakers should have learned more about the behaviors of snakes before making the appearance of one a somewhat important development at the end of the picture.