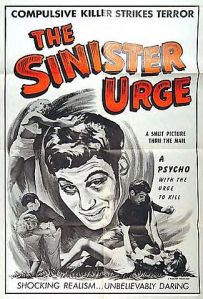 “Are gangster and horror films all you produce?” – Mary Smith

Ed Wood is considered one of the worst directors of all-time. However, with that title, came a certain kind of recognition and a strange appreciation for some of his work. His unique story also led to a great biopic, directed by Tim Burton and starring Johnny Depp and a slew of other great actors.

But for as much as Plan 9 From Outer Space is beloved for its faults and strangeness, The Sinister Urge should be shunned for its utter awfulness and complete lack of anything endearing or exciting.

I’ve seen several of Wood’s films and I am a fan of his work, when it is at its most creative and quirky. Unfortunately, The Sinister Urge lacks those things that make other Wood films palatable.

Wood’s script is one of his worst and that says a lot.

There are some people that think that Ed Wood was some sort of mastermind that knew what he was doing. They think that his movies were made to be bad, deliberately. As if he could foresee the legend he would become posthumously. The Sinister Urge is a pretty strong counterargument to that theory. It is the worst kind of schlock imaginable and doesn’t even come close to his more endearing work.

I like Ed Wood and I actually respect some of his films for what they are but this is not one of the films worth respecting. There is nothing enjoyable or entertaining about it. For those who have seen his more famous movies before this, this one is a damn disappointment and starts to make things clearer as to why he couldn’t really get good work in Hollywood.

So, yes, this does need to be run through the Cinespiria Shitometer. And the results read that this is a “Type 1 Stool: Separate hard lumps, like nuts (hard to pass).”