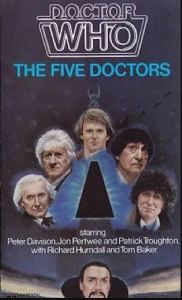 “A cosmos without the Doctor scarcely bears thinking about.” – The Master

While this was not a theatrical movie, it was a feature length special episode of Doctor Who and treated like a feature length production when it came out. It was created to celebrate the show’s twentieth anniversary and for only the second time in history, it teamed up multiple incarnations of the Doctor. This was also the biggest Doctor team up of all-time.

I want to treat all these feature length special episodes as films as opposed to just episodes mixed into the long running show. There are several of these and I want to review them separately, as their own bodies of work.

I was fortunate enough to see this one on the big screen, courtesy of RiffTrax. Now while it was a riffed version with hilarious commentary from some of the former cast members of the original Mystery Science Theater 3000, it was still an amazing experience seeing classic Doctor Who on a thirty foot screen. Especially a story that featured five Doctors.

While this isn’t particularly great as a film on its own, it fits beautifully within the Doctor Who mythos and is one of my favorite Doctor Who stories of all-time. Sure, it really only features three actual Doctors, as the First Doctor is not portrayed by William Hartnell, except in the intro as archive footage, and the Fourth Doctor really just has a brief one scene cameo and is really left out of the story. But all five of the Doctors are represented in some fashion.

The bulk of the acting duties falls on Davison (the Fifth), Pertwee (the Third), Troughton (the Second), Hurndall (as the new version of the First), Ainley (The Master), as well as some of the Doctor’s most famous companions: the Brigadier, Sarah Jane, Susan Foreman, Tegan and Turlough. Lalla Ward’s Romana II also cameos alongside Baker’s Fourth Doctor.

The story is a bit strange but that’s sort of the norm for old school Doctor Who, back in the days before the franchise had any female fans. But any excuse to bring multiple Doctors into an adventure, always works for me. Essentially, there is a big conspiracy and all the Doctors have to work together in order to save themselves. Each Doctor also has a companion from their runs as the character.

The special effects are on par with what was the standard for television show. It is low budget British television science fiction, so one has to sort of look passed the imperfections and hokiness and fill in the blanks with their imagination a bit. But this is always what I loved about classic Who. As a kid, it introduced cool concepts, with cheesy effects and it made my imagination run wild.

This story also features the Cybermen, a Dalek, the Time Lords and the super dangerous Raston Warrior Robot, who is a dude in a silver leotard and helmet that dances around, teleports and shoots spears.

The Five Doctors is far from perfect but it is a hell of a lot of fun for those who are fans of the original Doctor Who series, way before the 2005 revival. This is also my favorite of the multiple Doctor stories.