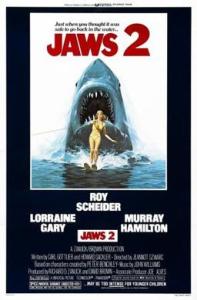 “But I’m telling you, and I’m telling everybody at this table that that’s a shark! And I know what a shark looks like, because I’ve seen one up close. And you’d better do something about this one, because I don’t intend to go through that hell again!” – Martin Brody

Jaws 2 has its fans and its detractors. I’m more in the fan camp, as I think it is a pretty good sequel, all things considered. Besides, it is nowhere near as bad as the two Jaws films that followed.

For a sequel that lost its original (and legendary) director, two of its lead actors and the benefit of using mystery over a full reveal of the monster, Jaws 2 does pretty good with the pieces of the puzzle it still has.

Roy Scheider is back, as is Lorraine Gary, who plays his wife. Additionally, Murray Hamilton returns as the sleazy town mayor, who apparently learned nothing from his greedy follies in the first Jaws picture.

This chapter in the franchise is much more action heavy. You see the actual shark more often, which is fine. After the big reveal in the first movie, there isn’t much reason to hide him in this one, as the building of suspense in Spielberg’s “less is more” technique wouldn’t work a second time around and in the first movie it was employed to hide the fact that the shark robot never worked properly.

While Jaws 2 is not the near perfect masterpiece of its predecessor, it is a worthy sequel in that it builds off of the first film. It gives you more time with the Brody family and gets more personal than the original movie. The fact that Capt. Brody’s children are in direct danger, makes the tension and the finale work quite well.

Also, the finale has Schneider’s most bad ass moment in his long career. The scene where he finishes off the shark by feeding it an electrical cable is one of the coolest things I’ve ever seen a manly man do on film and it tops the killing of the shark from the first movie, even if me saying that pisses some people off.

Jaws 2 is not a perfect picture but it is still a fairly strong outing and a good companion piece to the original. Granted, everything in the franchise just goes off the rails after this.