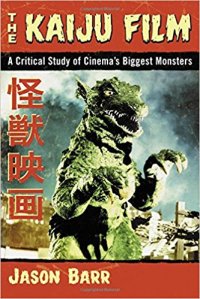 Jason Barr’s The Kaiju Film: A Critical Study of Cinema’s Biggest Monsters is really a mixed bag. It is a book I tried to like and get behind but ultimately, couldn’t.

It comes with several great reviews on Amazon but I guess I’m in the minority here.

The book is essentially a theoretical analysis of kaiju films throughout history. The author uses all kinds of examples to support his theories on the deeper meaning of all these films and how they change with the times. He covers politics, weapons of mass destruction, economics, foreign affairs, etc.

The problem is that the author just reads way too far into these films. Most people who are fans of the original Godzilla film understand the meaning behind it and the warnings it presents. However, most kaiju film after that were purely entertainment. Japanese culture certainly sprinkles in their philosophy and their view on life in many of these films but Barr digs so deep it feels like we are left to bear witness to him trying to make his theories stick.

It reminds me a lot of how conspiracy theorists over analyze things for so long that they can make anything into a conspiracy without much evidence and just a lot of theorizing and speculation. I feel like a lot of this book is cherry picking to fit the conclusions that Barr wants to make. It reminds me of Room 237, that conspiratorial documentary on The Shining, where the bulk of the rhetoric just seems like academic babbling.

Also, Barr takes sides on some of the issues and paints a picture that supports his stance. He also presents his theoretical analysis as if he is speaking factually and not simply theorizing.

In the end, most of these movies were made to capitalize on the kaiju craze of the 1960s. Many of the non-Toho films were just poor ripoffs of Gojira (the original Godzilla film). I just can’t buy into the idea that the writers, directors and producers sat down and tried to stuff so much political and social consciousness into these films, as Barr implies.