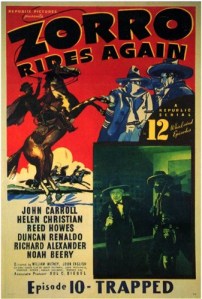 Zorro Rides Again has a few notable things worth mentioning. It was the first film collaboration for directors William Whitney and John English. Also, it was the eighth of Republic Pictures’ 66 serials. It was also just the third western themed serial that Republic did. Additionally, this was the first of five Zorro serials produced by Republic Pictures.

This Zorro serial was influenced by the singing cowboy trend of the time, so there are some musical numbers. I’ve never been a fan of that particular genre so what could have been a great serial adventure for a great and iconic hero suffered from its musical hokiness.

The casting was mediocre and no one really stands out or has a strong presence. Zorro, as a character, always stands out but he just seemed stripped of his coolness. He just didn’t feel like the Old West Mexican Batman that he normally is.

This serial doesn’t have much to boast about, unfortunately. Being a Zorro fan, I wanted to love Zorro Rides Again but I was mostly bored throughout it. Visually, it is average. The direction is fine for a serial but Witney and English hadn’t yet found their rhythm.

In any event, it did spawn four sequels and I’m hoping that they improve upon this weak initial outing.