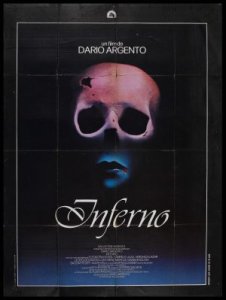 “There are mysterious parts in that book, but the only true mystery is that our very lives are governed by dead people.” – Kazanian

For those that don’t know, Dario Argento’s masterpiece Suspiria was actually the first part in what would become a trilogy of films. The second chapter in The Mother of Tears Trilogy is this picture, Inferno.

While this is not the masterpiece that Suspiria is, it is still a stellar companion piece that recaptures the beauty and dread of the first picture. It employs colorful tones and stark contrasts. It uses shadows and highlights superbly and is actually a bit more refined in this regard than its predecessor. Some of that might also have to do with Argento hiring his mentor and giallo master Mario Bava to create some of the optical effects, as well as matte paintings and some direction on trickier shots.

Additionally, Argento suffered a severe case of hepatitis while filming Inferno. He had to shoot some scenes while bedridden and then had to take some time off, as the illness got worse. Mario Bava stepped in to shoot some of the second unit material until production could commence. Also, Lamberto Bava, Mario’s son, was the film’s assistant director. So despite Argento’s health issues, the film was in capable hands and brought together three of the best Italian horror maestros.

Inferno is quintessentially a giallo in its visual style. While it isn’t a proto-slasher flick in the way earlier giallo’s were, it still employs the essence of one while there is much more going on than just a sole slasher cutting up victims in the night.

While shot mostly in Rome, the bulk of the film takes place in New York City. We find out that the evil witch from Suspiria was one of three sisters. This film deals with the sister that lives in New York. However, we also get to see evil forces at work in Rome and the appearance of a mesmerizing young woman that one can assume is the third sister. The third and final film in this series (The Mother of Tears) deals with the last sister and takes place in Rome.

If you are a fan of Suspiria, you should definitely like this film.

The narrative in this chapter isn’t focused on just one primary character like its predecessor. Inferno follows different people, in different cities, as they come to face the looming and growing danger. You kind of aren’t sure who you should be focused on until the film is rolling for quite awhile. There is the sister in New York, the girlfriend in Rome and the brother who travels across the Atlantic from Rome to New York. There are also other characters and you are never quite sure who might know more than they are leading on.

Suspiria was pretty straightforward with a lot of mystery and suspense. Inferno may initially seem a bit disjointed but its mystery has more layers and the suspense is still very effective. This picture enriches the mythos of the trilogy where Suspiria simply told its own singular story.

Inferno is a damn good movie. It is not Argento’s best but it still displays the exceptional work of an auteur with near perfect execution while still at the top of his game. Despite Argento’s health situation, he turned out an incredible motion picture that is just as enchanting and nightmarish as his magnum opus, Suspiria.