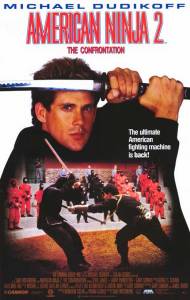 “I don’t like that tiny maggot, I don’t like him at all. I mean what is this? Ninjas? Drug pushers? My men being kidnapped and murdered? This is really beginning to get on my tits.” – Wild Bill Woodward

When I reviewed the first American Ninja I said that the films got worse and worse. I was wrong on one account, this film. Truth be told, while I watch the original every couple of years, I haven’t seen this one since I was a teenager. Back then, I didn’t like it as much as the first. Now, I think it is pretty equal, if not slightly better than the original. Things do go downhill after this one though.

The plot is a little wacky but the action and the setting are much better than the first picture. The story sees our heroes Joe Armstrong (Michael Dudikoff) and Curtis Jackson (Steve James) arrive on a Caribbean island (actually filmed in South Africa) to investigate why some Marines have gone missing. As the film progresses and ninjas keep trying to capture Armstrong and Jackson, we learn that some villain is making mindless super soldier ninjas out of the elite soldiers he captures. The end goal is to sell super ninja armies to other villains with large bank accounts. So we get a big finale of Armstrong and Jackson against an army of super ninjas.

Compared to the first film, Dudikoff is much better on screen in the action sequences. James also puts down the big machine gun and fights ninjas with a couple machetes. The film has a lot more hand-to-hand combat and the skills of the actors and the stunt work is just more refined and fluid in this movie. The main evil ninja isn’t as cool as the Black Star Ninja from the first movie but he’s still a solid baddie.

Unfortunately, Dudikoff left this series after this film except for a fairly brief appearance in the fourth film. This was also the last time we got to see the duo of Dudikoff and James on screen together, following the original American Ninja and Avenging Force, which came out between the two Ninja movies.

American Ninja 2: The Confrontation is a good sequel to the original. The series tanks after this installment but at least we got two good chapters before the breakup of Dudikoff and James and the introduction to David Bradley, who took over the series in American Ninja 3: Blood Hunt.