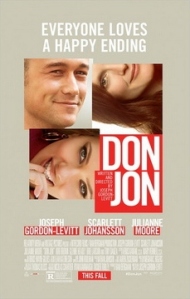 Joseph Gordon-Levitt has been proving himself to be quite the actor over the last few years. With Don Jon he goes beyond that, showing off his writing and directing chops for the first time. For a debut, it was a pretty good film. It was also smart of him to cast Scarlett Johansson as his love interest. Shit, I would’ve done the same but made her commit to some nudity. I kid… or do I?

Weirdly, after finding Johansson’s character to be poorly written with insane motivations, I did find Joseph Gordon-Levitt’s role to be pretty awesome. He owned the part and did a fantastic job. I guess this is what can happen when you write your own material. He really hit the mark though and the fact that he was also directing this film, didn’t seem to hinder his performance.

The other bright spot of the film was Tony Danza as Joseph Godon-Levitt’s dad. Dude was brilliant and I loved seeing him back on the screen because he’s still got it. Glenne Headly as his mother was also pretty awesome. I’ve loved her ever since Dirty Rotten Scoundrels.

Getting to the story, it was fairly bland overall and I found it mostly uninteresting. I really didn’t care about Johansson’s character and obtaining and keeping her was the primary plot device of the film. She was a bitch, unreasonable and a controlling douche. Joseph Gordon-Levitt needed to snap out of her spell after her first bullshit meltdown. And that’s my main problem with the film. But, then again, some guys can’t save themselves.

This isn’t a bad movie, I enjoyed it for the most part but I wasn’t as invested in it as I had hoped. I love Joseph Gordon-Levitt’s body of work and was excited to see how he did as a director. In that role, I feel that he succeeded overall. As a writer, well… I’m going to wait and see what he does next.