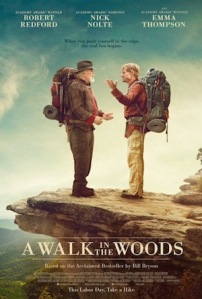 A Walk In The Woods interested me for two reasons. The first, is that I’ve wanted to hike the Appalachian Trail for quite some time. The second, I’ve always been a fan of Robert Redford and Nick Nolte.

This film is based off of the memoir of the same name by travel writer Bill Bryson. Redford plays Bryson and Nolte plays his old friend Katz, who accompanies him on his long journey walking from Georgia to Maine.

I’ve never read the book, so I am not sure how close the film depicts the source material. Although, I expected something deeper and more serious. With a couple of old chums who haven’t seen each other in decades, I was looking forward to not just a grand adventure but also seeing them have to deal with the challenges of their once close relationship and how their lives have gone in different directions since they last spoke. While this is touched on, there is no big heartfelt moment or a real catharsis for the characters – at least nothing is really explained; they just act enlightened. In fact, the motivation as to why Bryson wants to go on this journey is never really explained. He is questioned about it several times but it is never clear what it is he is expecting to find on this journey.

What saves this film is the chemistry between Redford and Nolte. Also, the comedy elements are really good and at least I enjoyed the film for that.

Kristen Schaal shows up and is pretty hilarious. One of her Last Man On Earth co-stars, Mary Steenburgen, shows up too. I enjoyed their small parts, as well as Emma Thompson’s.

Oh yeah, and Ron Swanson, er.. Nick Offerman shows up for a bit as a salesman at REI.

When comparing this to the recent Pacific Crest Trail film Wild, this is missing the heart and the purpose that that film had. While I love the book Wild more than the film, the movie still connects much deeper than A Walk In The Woods does. Maybe I will read the book at some point and I can compare them from a literary standpoint.

This film is worth a watch but it certainly isn’t a vital must-see.