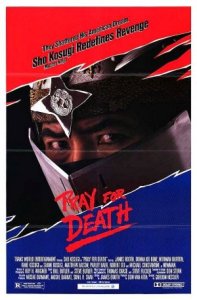 “I’m going to burn your kid like a roman candle.” – Limehouse

After three awesome ninja movies for Cannon Films, quintessential 80s ninja action star Sho Kosugi took his talents to Transworld Entertainment to make Pray For Death. This, more than his other Cannon films, felt like a true spiritual sequel to Revenge of the Ninja, Kosugi’s greatest movie. This is a pretty close second to that film but doesn’t quite measure up to it.

The story actually isn’t even that different from Revenge of the Ninja. In this movie, Kosugi moves his family to America to start a new life away from his ninja past. The family opens their own business, a restaurant. They quickly have a beef with some mobsters. One of Kosugi’s kids (played by his real life kids) is kidnapped. Then his wife and one of his kids is rundown by mobsters in a car. His wife is then murdered in the hospital. Kosugi finally straps on his ninja gear and goes Ginsu City all over Houston, Texas.

While the Texas setting didn’t give us a cowboys versus ninjas scenario like one would hope, it still gave us a sole bad ass ninja against a bunch of evil mobsters. Although, there is that amazing scene where Kosugi literally flips over some hillbilly gangsters in a beat up pickup truck. That should have been nominated for the Brass Balls Stunt of the Year Award in 1985 but I just made that award up and I didn’t have the money to make my own trophies in 1985 because I was six. But maybe I’ll make it and mail it to Kosugi now.

Pray For Death is not the epic ninja masterpiece that Revenge of the Ninja is but it is pretty close. It doesn’t have as much action as Revenge but it is heavier on the drama and family elements of the story. Also, it doesn’t have the insane and lengthy ninja battle that capped off Revenge. Regardless, it is still one of the greatest cut’em up ninja flicks of the 1980s. Plus, any film that makes Kosugi the focal point, benefits greatly. Enter The Ninja and Ninja III: The Domination lacked when compared to Revenge and this film, simply because Kosugi wasn’t the main character and just more of a glorified cameo.

I love Pray For Death. For a film that wasn’t made by Cannon, it certainly feels like it was.