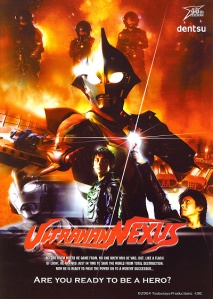 Ultraman Nexus was the first Ultraman series that I wasn’t wholeheartedly in love with. I guess that makes me the odd one out, as most people seem to really enjoy this series. Reason being, it is different than all the Ultraman series before it. This one was made to be more adult and it was the first really dark Ultraman show. At times, it had strong horror elements to it.

While I can understand Tsuburaya wanting to try something different, after the show had been around for almost 40 years but it just doesn’t feel right to me.

The special effects were unusually weird in some of the episodes. The big slime monster creature in the first few episodes was made up of bad CGI and not the standard rubber suit look that is customary with Ultraman monsters. It just felt out of place and there are other areas of the series where things just don’t seem to fit.

Nexus had a cool outfit though and he also fought a series of evil Ultramen that would pop up throughout the series. I will say, that as the series rolls on, it does improve. The battles between Nexus and whichever evil Ultraman he was pitted against were the biggest highlights of Ultraman Nexus.

The show is worth checking out if you are a hardcore Ultraman fan. While it is my least favorite that I have seen, many consider it the best. You can be the tie breaker.