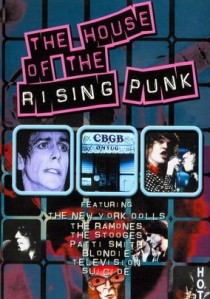 House of the Rising Punk is a German documentary about punk music, primarily in America but they do cover Sid Vicious and the Sex Pistols, albeit from an American point-of-view. And even though it is German, the documentary is completely in English with a few German subtitles here and there. It is also available for free on Amazon Video if you have a Prime account.

For a one hour film, it covers a lot. It interviews several of the musicians and other people involved in and around the scene.

The film examines Richard Hell and his bands Television and the Voidoids, as well as the Ramones, the Sex Pistols, Patti Smith, Alan Vega and Martin’s Rev’s Suicide and others.

It is pretty comprehensive for its running time. Sure, a lot is left out and the story is so broad it couldn’t even be covered in a one hour documentary but this is still a highly informative and compelling watch.

The highlight of the whole thing for me was hearing Dee Dee Ramone talk about the history of punk from his personal experience. It was also cool to see Richard Hell telling his story and Jim Jarmusch adding in his two cents. It also explained how Patti Smith’s unique style came to be.

House of the Rising Punk is a quick but meaty look into American punk and how it shaped pop culture.