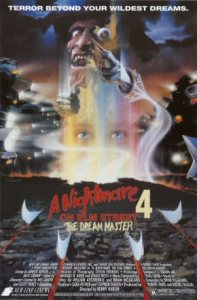 The Dream Master is the most successful film of the original series of six. I believe it is because it took the formula of Dream Warriors and then upped the ante and shot it more like a 1980s MTV music video in a time when MTV ruled the world and teenagers’ minds.

It is a colorful film with great editing and visuals. It opened the door for director Renny Harlin to go on and have a pretty big film career.

While Dream Warriors is my favorite film of the series, this one is right behind it. The dream sequences are very imaginative even the few that are a bit cheesy. But, at this point, the franchise was serving up more cheese and laughs than utter dread. Sure, Freddy was still sinister and evil but he had fully become the character everyone was cheering for.

Robert Englund was stellar as usual and he had great chemistry with his new foil, Alice (played by Lisa Wilcox).

This film sees Alice gain the powers of her friends as they die. Whatever their talents are, she has them all by the end of the movie, giving her more ammunition when taking on Freddy. She also knows how to control her dreams in a way that others before her weren’t able to do. She is Krueger’s perfect nemesis. Ultimately, where Nancy is the godmother of all the Elm Street children, Alice is their unrelenting protector.

I love this movie. It was also the last of the good films in the series.

Alice is back. This time she’s pregnant. Freddy wants the baby in an effort to resurrect himself. Essentially, we have the A Nightmare On Elm Street version of Rosemary’s Baby.

I was glad to see Alice and her boyfriend Dan return but overall, this film sucked.

There were a few good dream sequences, mainly the one where the kid gets sucked into the comic book. Also, the force feeding death to Greta was pretty well done and stomach churning – literally.

While this film tries to give Freddy Krueger more backstory, it chips away at the mystery too much. They revisit the nun mother plot from the third film and expand on it. All this ties it to the baby plot thread.

This film was also toned down in its color palate and just feels and looks really bland after the MTV-esque Dream Master.

It is mostly a sterile film with little to add to the series. Considering they got Alice back, they wasted an opportunity. Additionally, the writers completely disregarded the fact that she had the ability to get her friends’ skill sets. She ran around like a bad ass, which was fine, but she didn’t have the magic about her character that was there in the previous installment. 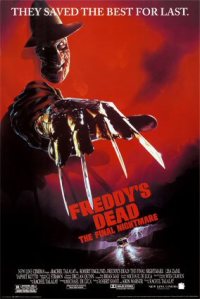 This is, by far, the worst film in the series. While Freddy’s Revenge was a weird piece of work, it had so many redeeming factors. This film, truly has none.

The mythos is completely fucked up, similar to what happened to Jason Voorhees around the same time with Jason Goes to Hell. Freddy now has a daughter, he is now cemented as a child molester – which was just implied before, he had a normal family with a nice house but murdered his wife in front of his daughter and none of it made much sense or added anything interesting.

The film fast forwards to ten years into the future where all the Elm Street kids are dead and Freddy needs the last kid to go out and lead others to him. The fact that Freddy just assumes that kids will make it back there, doesn’t make any sense either.

Also, there are barely any kids in this film. Only three of them die. There are also too many survivors in the end.

Most of the dream sequences are completely retarded. For instance, the one where the kid is trapped in the video game is more of a cartoon and looks nothing like video game graphics. Also, the game play makes no sense. It was clearly devised by someone who never played a game before.

The drug use parts were also written by someone who clearly never smoked weed. Weed doesn’t make you hallucinate like LSD. But in this movie it did. Sure, you could write that off as Freddy making the kid trip when he got drowsy but it still doesn’t make much sense given the scenario.

The film is capped off by an atrocious 3D sequence through Freddy’s brain. It serves no purpose to the story and just makes the film look more ridiculous when played back over twenty years later on a 2D screen.

I hate this movie. Freddy wasn’t killed by the heroine of this film, he was killed by shitty execution, shitty writing and a shitty director.