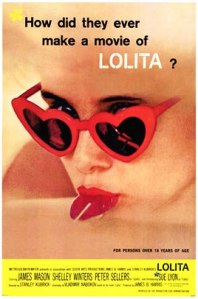 The poster for this film asks, “How did they ever make a movie of Lolita?” The answer: with lots of meddling by overreaching censors with nothing better to do than to dictate what should and should not been shown in the art form that is film. This was also before the modern film ratings system came into play.

As far as the movie goes, it is hampered by the issues above. It is still a better than decent motion picture, though. While it isn’t close to Kubrick’s best, it is a great lead-in to what was to come from the director, as almost all of his films after this are either masterpieces or pretty damn close. Had the censors backed off, Lolita may also have been able to be considered in that regard.

From a stylistic standpoint, this is less artsy than the later Kubrick pictures but it is still immaculately shot with pristine camera work, editing and beautiful cinematography. The attention to detail and the depth and character of the sets and the world around the actors felt lived in and authentic. The black and white presentation worked quite poetically as a contrast to the colorful story and very layered and subtle undertones that added a great depth to the characters and the situations they found themselves in.

The highlight of the film for me was seeing Peter Sellers play a myriad of characters. Granted, he was the same guy but he played roles within the film. This was sort of a precursor to what he would do in Dr. Strangelove or: How I Learned to Stop Worrying and Love the Bomb, where he played three separate characters. That film is one of Kubrick’s best and it is the pinnacle of Sellers’ acting career, in my opinion.

Sue Lyon was also quite impressive, especially for her age at the time of filming. She had real acting chops and held her own alongside the talented cast around her.

While this film explores some uncomfortable territory, in that it follows an older professor who is infatuated with a teen girl, it doesn’t get as dark as I feel it maybe should have. I’ve never read the book but from what I’ve read about the book, it goes places that the film wasn’t able to due to the censors. I really would have loved to see what Stanley Kubrick could have done with the film had he been left alone.

Lolita still turned out to be a good film in spite of its production issues and the fact that the director’s vision was compromised by Hollywood politics. Unfortunately, the bulk of the story is presented in ways that may be too vague for audiences to fully grasp. It isn’t hard to figure out what’s going on but the motivations of the characters, while known, are still kind of mysterious and not fully explored.