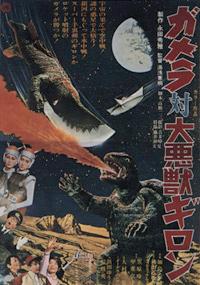 “You know, guys… it just kinda dawned on me how weird this film is, you know? It’s kinda goofy.” – Tom Servo, Mystery Science Theater 3000

Gamera vs. Guiron is not a good movie, even for Gamera standards. Although it does feature the coolest kaiju in the original run of Gamera films and it is pretty hilarious in its hokiness.

In this film, Gamera battles Guiron, which should be apparent by the title of the picture. Guiron also battles Gyaos, a villain kaiju from a previous Gamera movie. Both battles are actually pretty cool but most of that is because of how cheesy and ridiculously violent they are.

At this point, the Gamera franchise was geared towards kids. Every movie featured young children with Gamera acting as their protector and friend. This was to give kids in the theater a natural way to relate to the big monster. Strangely, this film has no reservations about kaiju monsters dismembering each other. Guiron reflects Gyaos’ laser, which severs Gyaos’ leg. He then chops his head off and proceeds to cut him up into bits and wave around his fresh kaiju cutlets in total glee.

The plot of the film isn’t that important but in a nutshell, two boys hijack a UFO on Earth, end up on another planet after flying through space with Gamera, witness the battle between Guiron and Gyaos, they then get captured by aliens, they defeat the aliens and then cheer on Gamera as he defeats Guiron using gymnastics moves.

The film is stupid yet it is fun. There isn’t much more to say about it. But I’ll leave this review with Gamera’s version of the “Safety Dance”, as it’s a better look into this film than an actual trailer.