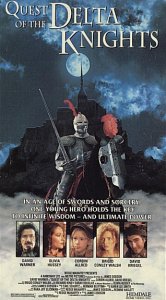 Quest of the Delta Knights is pretty awful. It has a 2.1 rating on IMDb but that may be a little harsh. Sure, it is well below average but it also isn’t complete dog shit. It weirdly has some charm and it is hard to not like David Warner, even in really bad films.

It was a film that was usually in the children’s section in the video store and it seems that it was filmed in a style that feels like a kids movie but it has some subject matter that doesn’t make a lot of sense, mainly a whorehouse and literal piss throwing.

The film also doesn’t seem to really understand the world it represents. There is a weird mix of cultures that just doesn’t make sense to the time, place and context of the story. Also, Leonardo Da Vinci is a dandy made to look like he stole all his brilliant ideas.

The acting is bad, the direction is awful and the story makes about as much sense as a clown headbutting a beehive. Okay, maybe that 2.1 on IMDb isn’t looking so bad now.

I would suggest that no one suffer through Quest of the Delta Knights but if one chooses to, at least watch the version that is riffed by Mystery Science Theater 3000.

I totally take back where I said this has some charm. It must have been the wine in my blood stream.