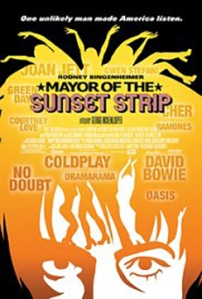 Rodney Bingenheimer should be a rock god. No, he isn’t a musician, at least not in the sense that he is known for picking up an instrument or singing to crowds of thousands, but he is a legendary DJ and instrumental in discovering a multitude of rock legends.

Bingenheimer isn’t a rock god, however. He is beloved by many icons in the music industry and is a friend to nearly everyone but mainstream knowledge of him isn’t as widespread as one would think, considering his contributions to pop culture.

Mayor of the Sunset Strip examines this and it also examines the personal life of Bingenheimer.

The film interviews several of the legends and friends who have all reached success because of Bingenheimer’s ear for great music. Bingenheimer, in many cases, was the first DJ to give radio play to so many of these great bands. He also had serious charisma and a great personality, which helped him evolve from a groupie to a man that shaped the future of rock and roll.

It is hard to believe that he isn’t a household name outside of L.A. or to hardcore rock aficionados. Maybe it is because he is a small, sweet man and off the air is very reserved and shy. The film does paint a picture of a man who is soft and kind but maybe that is its agenda. He seemed uncomfortable around the cameras documenting his life and not too keen on revealing too much about his childhood and personal relationships. One gets the feeling that there is a lot of pain there.

Mayor of the Sunset Strip is thoroughly enjoyable but it does leave you feeling sorry for Bingenheimer in regards to his lack of fame and his seemingly nonexistent love life. It leaves you thinking that he is a man that hides behind his own legend and maybe he just isn’t comfortable with the spotlight so he never just grabbed it.

Rodney Bingenheimer loves music. He was able to turn that love into something monolithic.

In the end, he should be looked at on the same level as Mick Jagger, David Bowie and Paul McCartney but from what I can tell, he probably really doesn’t want to be.

If you love rock and roll and especially music history, Mayor of the Sunset Strip should be required viewing. I knew of Bingenheimer before the film but it made me really appreciate his contributions to music even more.