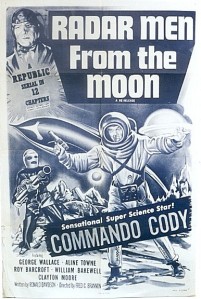 Commando Cody serials are often times confused with others but there are only two official Cody serials. It sometimes gets confused with Zombies of the Stratosphere, which originally was intended to be the first Cody follow-up but was changed during production. It is also confused with King of the Rocket Men for its similar character but that serial predates Radar Men by three years. Some people also think that Disney’s 1991 film The Rocketeer is a re-imagining of the Cody character but it is actually based off of a comic book series. Granted, that series was inspired by Republic Pictures’ multiple rocket men characters. It is also worth mentioning that George Lucas, a fan of these types of serials, named a Clone Trooper with a rocket backpack in Star Wars Commander Cody. This Cody served under the command of Obi-Wan Kenobi during the Clone Wars and is featured heavily in Star Wars: Episode III – Revenge of the Sith.

I was first introduced to this serial when it was split up over the course of the first nationally televised season of Mystery Science theater 3000. Just like the serial format it was originally released in, it played as shorts before the movies featured on the show.

Radar Men From the Moon is pretty standard fare from Republic Pictures. It has the look and feel of their other serials at the time. However, the rocket-powered hero is just cool as hell. Sure, this wasn’t the first rocket man but Commando Cody is the most iconic and his serials were better than the others, in my opinion.

George Wallace was a good choice to play Cody, which makes it somewhat disheartening that he wasn’t in the only sequel. The rest of the cast was good but serials are more about the action than actual acting prowess.

The cliffhangers from chapter-to-chapter are pretty repetitive, especially within the context of the genre, but they really only serve to conclude chapters and to not actually make you think the hero is dead. Everyone knows they will survive.

Overall, Radar Men From the Moon is fairly exciting. It went on to inspire other filmmakers and studios. I wouldn’t be surprised if the character was resurrected, at some point. Hollywood loves recycling itself, so who’s to say.